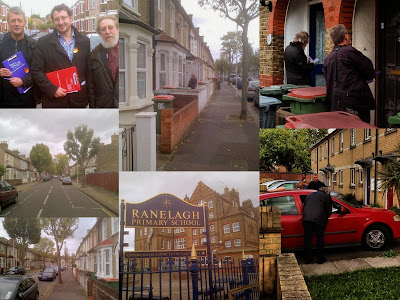 The weather looked uncertain but we decided to take the risk of rain and "door knock" Corporation Street, E15.

This is the longest residential street in the ward. It is an interesting mixture of  mostly terrace housing -  freehold, leasehold, private rented but also Council and Housing Association.

It is a little unclear but this reference in Newham Story about housing history in Newham suggests that the the maisonettes in the street are historic "double houses".

"The earliest council dwellings (1899-1905) were much better adapted to the needs of working-class tenants than those of the private builders. Most of them were two-storey 'double houses' with a flat on each floor. The flats varied in size from two to four rooms, with a wash-house to each flat. The original design was by Lewis Angell (borough surveyor 1867-99) who believed that such dwellings were 'healthier and more humanising ... especially for children', than large 'barrack-like' blocks of flats. The largest estate, at Wise Road, Stratford (94 flats and 11 single houses) survives, along with others in Bethell Avenue, Plaistow, and in Eve and Corporation Streets, West Ham"

Most homes in Corporation Street are owner occupied or private rented. Zoopla estimates average house price of £249,396 in the area and average rent in E15 is £1,623 per month. According to Tesco Finance such a repayment mortgage would cost £1390 per month.

How on earth anyone can afford rent or mortgage of £400 per week is just beyond me?

During the doorstep I spoke to a resident who was overcrowded in his home and had 9 children. He asked what I could to do to help him get  a bigger place. I told him that I cannot interfere in the allocation process but if he has been not dealt with properly under Council procedures then I would support him.  He seemed content with this.

When I asked one household if they supported Labour, I was told of course we do, we are a Labour family.

I spoke to a young man who lived with his mum, who said he had never voted and knew nothing about politics. He asked me "can you really change things" I said yes we can and handed out a leaflet on Labour plans to freeze energy prices as an example.

One resident told me that she had went to school with Stratford Councillor, Terry Paul. I immediately asked her if she had any embarrassing stories she could tell me about Terry to tease him. Then we thought about it and agreed that there is nothing we can say that would ever embarrass Terry.

I had a good conversation with a wavering Labour/Green who was undecided how she would vote but said "its nice to get a visit anyway".

At the very last house on our list, John Whitworth had a very angry woman complaining about East Europeans, getting drunk in the streets, taking jobs and houses. She said she had a black partner and was not at all racist. John tried to suggest that perhaps East Europeans were doing jobs that many Brits did not want to do and that the reason why there is a housing problem in London is due to us not building enough. But she was not having any of it.

While I have a zero tolerance of anyone who is drunk and abusive or leave litter, I do clearly remember canvassing in the past before we had migration from East Europe and hearing pretty much the same comments and complaints over housing and jobs about Asians and West Indians.
Posted by John Gray at Friday, November 01, 2013

In this day and age. You still believe that British people don’t want to do certain jobs. Are you really a trade union representative? Aren’t you aware that unemployed people no longer get long term unemployment money and have to work for their benefits? You know, I think you haven’t a clue! I was slowly returning to Labour but after reading this, I think I’ll rather not. ‘You sure you’re in the right party’

Not really sure what you are going on about but I don't think that unpaid placements at Poundland counts as "work".

The other week I got the 5.45am train at Forest Gate in order to catch an early connection. To my surprise it was pretty packed. I "guess" the majority of people were migrant workers on their way to the city of London to clean, cook or other low paid manual jobs.

“Not really sure what you are going on about but

‘That’s always your reply isn’t it?

You did write John i.e. yourself’, tried to suggest that perhaps East Europeans were doing jobs that many Brits did not want to do

I and a lot of other working people believe working as a cook, cleaner or any other low paid manual job must be immeasurably preferable to being forced to work for dole money. Who exactly are these Brits that don’t want to work for the minimum wage and prefer forced labour, some working 40 hours per-week for £70? "You're living in cloud cuckoo land."

Well, the reason I'm not sure is that you don't make any sense? (whoever you are)

It was actually John Whitworth not me who suggested that some East Europeans were doing jobs that some UK nationals did not want to do. I happen to agree with this and it is also in my opinion an indisputable matter of fact.

If you want anyone to take you and your views seriously firstly stop being a coward and hiding who you are and secondly try at least to formulate a reasoned argument instead of indulging in ranting and silly trolling.

Ok, I apologise, I made a mistake and got confused by the John names. It was John Whitworth that said it but you agree with him 100%. So it doesn’t matter, does it?

You say it’s an indisputable matter of fact that some Brits prefer working for their dole money “forced work i.e. slavery” instead of working for the minimum wage. Prove it then, give me one name of any unemployed person that prefers to be a slave.
And you call me a troll! You’ve got a nerve. People like you have destroyed the Labour party, destroyed the labour and trade union movement. I bet you're one of them Daily Mail loonies that write comments about the unemployed and disabled, calling them scroungers.
Even UKIP are more left wing than you. Maybe it would be better for you “ certainly better for us” if you joined the Tory party.
You are a clown.

You do remind me of someone?

"During the doorstep I spoke to a resident who was overcrowded in his home and had 9 children."

May be your Labour colleague Tom Copley (the one who made silly comments) would like such people to be moved into Buckingham Palace.

"I said yes we can and handed out a leaflet on Labour plans to freeze energy prices as an example."

Do thank to Ed Milliband for his comments. Now the energy companies have increased their prices ahead of the price freeze (assuming Labour win).

The energy companies suck. Competition has not worked well in the energy (compared to Telecoms).

The energy companies and regulators are an 'old boy' network. (I don't mean in the schooling sense).

I am a republican but while I think Tom's comments were a little bit daft he is right to draw attention that the Royal family have a massive oversupply of state provided housing and others have nothing.

The issue is that the energy market is broken. They would have raised the prices regardless of what Ed said, because that is what they do.

The only answer is public ownership of such greedy monopolies.

"At the very last house on our list, John Whitworth had a very angry woman complaining about East Europeans, getting drunk in the streets, taking jobs and houses. She said she had a black partner and was not at all racist."

Not to be confused with your earlier commentators.

Why would anyone want to employ some of today's youth?.

I had a nasty experience with a college going apprentice of a tradesmen. They were in my home doing some works. Then suddenly, the apprentice flipped and made out as if I had insulted him. He then raised in his voice in an aggressive manner and said "I want to punch you in the face" etc...

He seemed like a nutter. I apologised, but I made it clear, I had not insulted him. He still would not calm down.

In 3 seconds flat, my opinion of this young man changed from college apprentice to thug / nutter.

How can someone go into someone home and then threaten them?

This apprentice is not fit to go into anyone else's home. I feel that he really should be reported to the police, as he is not to go into someone's home.

The boss, tried to make light of it, as if saying he had smoked weed. Then asked his apprentice to wait in the van.

This apprentice was from a Middle Eastern background and educated in Britain (probably from Birth). So he should know not to speak to clients in this manner.

The apprentice did not seem to care about his career, or the fact he was still learning his trade. He did not care that his behaviour would effect the lively hood of his boss.

I am still angry this experience.....

It all okay for this woman to complain about East Europeans taking jobs, but look some the attitude of today's British youth.

Why should anyone give a chance to someone from such a background?

It is all well and good politicians trying to do something about youth unemployment, but what is the point of creating jobs, apprenticeships or placements, if these youths just dont' have the right attitude or value their jobs.

That is the difference, the East Europeans value work. They respect the boss.

I would have to agree with Jamie Oliver....

The problem with our open EU border, is that we attract benefit scroungers too... I do worry the Romanian and Bulgarians...

A nasty experience and I would have probably called the Police since it is clear that this young man has issues and should be warned at least about his behaviour. I would definitely make a complaint.

However, the vast overwhelming majority of young people in this country are decent, respectful and well meaning. A bit like the rest of us in fact. Regardless of where their family had come from.

You do have a tiny number of "bad" kids but to be frank, who made them like this? Bad parents, relatives, neigbours, teachers, social workers etc. I don't believe that any one is born "bad" - they are made.

Older people have also been complaining about the next generation since at lest the ancient Greeks times.