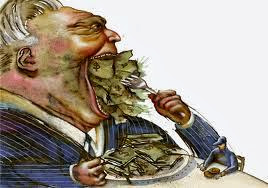 “Britain’s top bosses are back to their old tricks as their pay is growing 20 times faster than the average worker.

“It’s one thing replacing bonuses with long-term incentive plans, but FTSE 100 companies are simply exploiting this change to make their fat cats even fatter.

“The time has come for legislation to put ordinary workers on the pay committees of companies. This is the only way to bring some sanity to the way in which directors are paid.”

Can you believe how greedy these people are?  When most workers in this country have had their wages cut in real terms for the last 5 years? Their pensions and insurance policies are also being reduced to pay for what I can only assume to be in the majority of cases - simple fraud and embezzlement

Enough is enough. The British people are not powerless in this. Parliament is sovereign and in 2015 vote Labour and demand they do something about our broken market economy.

Remember if you don't vote you have no right at all to moan about this.
Posted by John Gray at Tuesday, November 19, 2013

if the employees got 15.1% as well then it would be fair enough. Instead they have pay cuts.

FTSE price is also based on forward pricing sentiment not past performance.

JD just because the FTSE is up 15.1% it is not a reflection of the underlying company profits. The FTSE is a dodgy index, in that it only measures the top 100 companies in the UK. Some companies drop out and new companies come into the index.

John - I don't think employees should get 15.1, neither should directors. Inflation is running at about 3% and it should be at that level. Otherwise you end up with hyperinflation....

true anon but we are talking about "Fairness". Why should only the directors get massive pay rises and their ordinary workers get pay cuts?

actually thinking about it - a 15% pay increase would bring workers back to pre recession pay levels ish), result in a welcome increase in demand for the economy and reduce household debt. Its not inflation we should fear at this moment but deflation.

So 15% across the board pay rise for all workers is Win, win, win.

Do you really think companies can afford a 15% pay increase?

You say deflation is a risk, yes it is, but so is hyperinflation.

The Government has been printing money (Quantitative Easing). I am perplexed, why we have not seen hyperinflation. The Bank of England, cannot raise interest rates to keep a lid on inflation, because Government debt is so huge, otherwise the UK will default on payments. We are in a worse situation then Greece.


I suggest you read MoneyWeek :