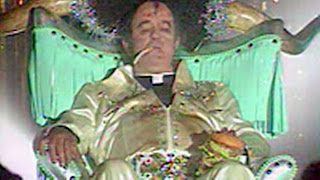 Well done to Labour Anne Peach for winning at Radford & Park last night and yet another stunning success for Trade Unions & Socialist Coalition (TUSC), who were bottom and even beaten by the "Elvis Loves Pets" candidate.

Hat tip Captain Swing and thanks to Father Jack.

Update: I have just been reminded that Elvis also beat TUSC in the Eastleigh by-election.
Posted by John Gray at Friday, November 08, 2013

We know by-elections are the most unfavourable terrain for a new party. Except in exceptional circumstances, or perhaps with a large budget, elections are not won in three weeks - you can only harvest the votes from previous activity or reputation.

But I wonder what your comment was a few weeks ago when we got 9.7% in Caerphilly, or 27% in Fleetwood? Or when we won a council seat just outside of Rotherham?

Next year will be different, if we meet our target of 625 candidates on May 22nd - with the entitlement to fair electoral coverage that that will bring - then I'm sure we'll see a large number of very credible results.

Yes, I would agree that by elections are difficult for new party's but as you point out you and other "leftist" parties such as socialist alliance, respect etc have done well in similar circumstances.

I think the issue in this by-election is that even in 3 weeks a single candidate door knocking in a working class area arguing politics should get at least a 3 figure vote.

Making fiery speeches and handing leaflets out in street stalls isn't going to convince anyone.

While I think the wider issue is if you cannot attract people "like" me to your politics then you have no credible future.

In my opinion of course for what it is worth.

'You can only harvest the vote from previous activity or reputation.' Spot on. So we can take it TUSC simply parachuted into the area having done nothing previously. That of course is the basic difference between when the Labour Party was formed and the latest ultra project. The Labour Party was new, it's activists weren't .
Dave Nellist thinks you 'harvest' votes. Profoundly Leninist. Working class voters are corn waiting to be gathered in. Passive recipients of his message. Well they're no ones passive recipient, shown by TUSCS lousy vote.
'Next year it will be different.' No it won't. It wasn't for Socialist Alliance, the different manifestations of Respect or any of the other ragbag of far left organisations that have run from time to time. The basic reason. They don't give a damn about the communities they seek to represent and people can smell it.

you have hit the nail on the head as usual Dave. The ultra left despise the working class and think they are too stupid to know whats good for them.

The working class sheep need a self selected vanguard to lead them to the promised land of milk and honey.

Of course it always actually leads to mass murder and death camps.