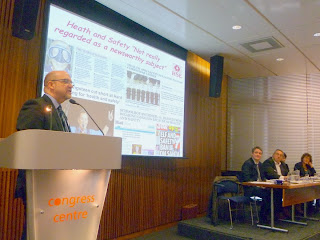 I arrived late and then had to leave early from this excellent health and safety seminar organised by SERTUC (South Eastern Trade Union Congress) which took place the other week at Congress House.

When I arrived Gerard Stilliard, a partner at trade union solicitors, Thompsons (seen
at London UNISON safety committee earlier this year) was speaking about the removal by the Government of Civil liability therefore returning workers protection to that of pre-1878 and the need to prove negligence. He finished his speech by thanking the audience and wishing us all "Good luck" in the future since "we will need it".

Next to speak was  Mike Wilcock, Head of Operations in the South East Health and Safety Executive (HSE). Mike (see picture above) became interested in health and safety because he trained as an industrial chemist and got blown up in a factory in France. He was unimpressed that the French safety inspector looking into this incident was more concerned about going to lunch with the factory owner.

He is very proud of the work of the HSE and concerned that due to reductions in the number of his staff, they now have act more as Policemen and are not "here to help". Real health & safety is not about banning conkers, its about stopping people being killed and injured. Regarding the recent reviews of safety legislation, he accepts that simplification and clarity is good. We must be careful not to throw the baby out with the bath water. In Qatar 40 workers have already been killed building the 2022 World Cup stadiums. In the UK we had no deaths when building the Olympics.

He can now only send inspectors into the highest risk employers. Those who kill and injure the most.  But what and who fills the gap? It has to be the professional safety advisers and trade unions safety reps. Use to have 70% proactive inspections now 70% plus are reactive. HSE will now charge employers £122 per hour if they have to write to them or issue a notice.

In Q&A I asked if trade union safety reps were being expected to help fill the gap caused by the reduction in HSE Inspectors, they should be given the power to issue provisional improvement notices? (PINS) This would give reps greater credibility. Martin disagreed and said that safety reps are already credible and often are better trained than managers. He also didn't think it was at all likely in the "current landscape".

Next speaker was Dr Jenny Harries,  Regional director South of England for Public Health. For her  good health is good for business and the workforce. Public health is everyone's business. See the Marmot Review. Clear link with good employment and good health.  Poor employment and unemployment with poor health.  The affluent tend to retire without disability and live longer.

Stress is still the biggest cause of sickness. Companies with higher levels of staff engagement have 13% lower staff turnover, they have less than half the UK average sickness absence rate and consistently outperform on the FTSE 100 (reference Sunday Times : Best companies to work for in the UK).

I then had to leave for another meeting which is a shame since as a union safety rep I want to know more about "well being" at work as well as avoiding direct injuries and diseases. It is an area that I don't think the unions or the employers do anywhere near enough on.
Posted by John Gray at Sunday, November 17, 2013

"In the UK we had no deaths when building the Olympics."

Not sure who you mean by "We" but I think that the fact there was no deaths is to the credit of everyone involved.