Rowenna Davis "What could One Nation Look like under Labour?" 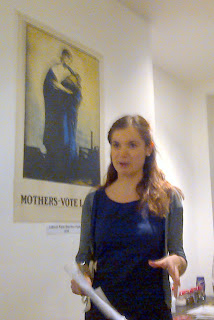 I've been catching up on a back log of blogs based on my twitter feeds from events I have attended. This picture is of journalist, author and Labour Councillor, Rowenna Davis, speaking to West Ham Labour Party General Committee last month on March 28 at our Stratford HQ.

Each month the GC invites a political guest speaker to address the committee and take questions.  Rowenna wrote the book "Tangled up in Blue: Blue Labour and the Struggle for Labour's Soul".

Rowenna started off well by describing how she got her Labour values while on the play grounds of a South London state school but she showed her sarf origins by getting her East London geography slightly wrong and thought she was on the other side of the River Lea.

She rightly attacked the disgraceful Curzen Cinema chain for lauding middle class lefty films while treating its workforce like dirt, with poverty pay and zero hours contracts. New Labour was wrong to push the market so that the State provides less. Labour now has to collectivise and organise to change society.

What “Blue Labour” is really about is decent jobs and homes. There use to be a social contract that if you worked hard at school you would end up with a decent job. This has now gone.

She thought that the bedroom tax is so unfair since it is a symptom of an economy dominated by London with its desperate shortage of housing while there is rows of empty homes in the north.

She supported the German regional bank model with worker reps on company boards as the best way to raise wages, improve sick benefits and pensions.

In the Q&A I thanked her for being in affect the first speaker on the West Ham Ward and UNISON Housing Association motion on a “Living Wage Plus for all in Newham”. Which was later passed by the GC with a large majority (including even Newhams own "Red Tel").
Posted by John Gray at Friday, April 19, 2013

"She supported the German regional bank model with worker reps on company boards as the best way to raise wages, improve sick benefits and pensions"

Raise wages?. Are we going back to the bad days of Labour?. YOU CAN ONLY SPEND WHAT YOU EARN. If a company improves its productivity, there is no reason for not giving a bonus to employees. Where do you Labour lot think the money comes from?

I just wish Labour and the unions were forced to work on a market stalls and learn a bit about grafting and economics. Oh and yes, be the boss of some real militant workers - so you can get a taste of your own medicine.

I read Rowenna's profile. So another politicians, whose only skill is being a journalist, writing a book and like Stella jumping on the betting shop band wagon.

and the problem is with raising wages? In the UK at the moment employees and shareholders are being ripped off by senior management "mates clubs" who stuff their mouths full of gold. Nothing to do with productivity.

I'll think you find Labour and Union activists do know about grafting and economics unlike the public school posh boys who run this country.

Rowenna can't win can she? Politicians are accused of not being concerned with real issues but when they do - they are accused by do nothing anon moanies of being on a bandwagon!