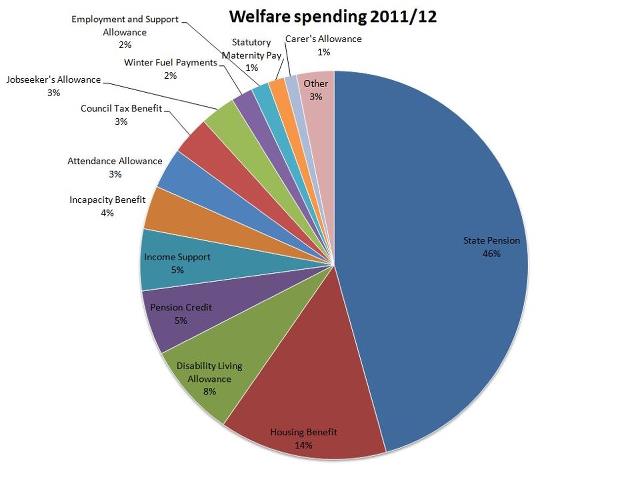 Hat tip for picture and great rant to Jon Leighton"Ok, I can't keep my gob shut any longer. I'm sick to death of seeing posts on Facebook about benefit scroungers. Do you know the figures? Because if you did you might see it in another light.

Did you know that only 3% of the benefits budget goes to people seeking work? 53% is pensions and other related old age benefits, 18% is Housing Benefit (which currently goes directly to landlords) 18% is working tax credits, and the rest disabled benefits and other bits and bobs. (And by the way, the Government figures say the fraud rate for disabled benefits is 0.3%)

In fact, the majority of folks claiming housing and council tax benefit ARE IN WORK.

I could write a bloody essay on this because I deal with it everyday. Our benefits budget is not out of control. According to the OECD Britain's benefit bill per head is nowhere near as generous as half the countries in Europe. (And unemployment benefit is particularly stingy compared to most)

The vast majority of folks just want to get on but minimum wage jobs are not paying enough. (This might explain why at work we're seeing working people going to bloody foodbanks every week.)

This shitty government is turning people against each other. And it's totally unwarranted. Yes, welfare needs reforming but you don't do that by kicking people out of their homes, stigmatising them so that they get spat at in the street and driving them to suicide. - these have all happened so far.

In the last two years 80% of people applying for housing benefit were all working. We can reform welfare by bringing in a living wage so that people don't have to claim benefits to get by. At the moment the welfare budget is subsidising low pay and private landlords on a grand scale.

When you see a post that puts the boot into benefit claimants, think twice before you like it because let me tell you, we are ALL only three mortgage payments away from disaster.

(If anyone wants the sources of the figures I have quoted, I will only be too happy to provide them)

Id be really interested in the source of the figures, John

Hi John, I would be grateful for sources of these figures. This is a nice pie chart and I would like to use it. Thank you

Below is a quick pie chart based on table 1b from that spreadsheet- Table 1b: Benefit expenditure by benefit, £ million, real terms (2011/12 prices). This table breaks down every type of welfare expenditure that accounts for over 1% of the welfare bill for 2011/12."

There is an error in your blog. The pie chart says 14% of welfare is housing benefit, not 18% as you have stated in your blog.

Housing benefit is not just landlords, but also councils and housing associations landlords. Given that you work for one, you should know this???

I was chating to someone, who told me single mums are being forced into work due to these benefit changes. Mums are forced to take up part-time work, this explains why people on housing benefit are having to claim. It also explains why unemployment is going down.

Labour should have focused on educating young people and discouraging single mother culture. I just noticed a single mother near me and the dad visits regularly, so why is n't he living with her?.

As Stephen Timms MP (kinda) said you should only have children within marriage.

Housing benefit is a welfare payment by the state to make up for an inadequate income whether to private landlord or housing association? Still welfare?

There has always been a majority of housing benefit claimants in work. This will go up since more tenancies in public sector will be near market rates not social rents.

Labour did do a lot - remember Surestart? Which the Tories are now slashing.

I assume they are not living together because their relationship has failed? It happens. Not good for kids to be brought up in household where parents miserable and/or hate each other.

Well, he didn't say that. He suggested that the purpose of marriage was having kids. See above

Facts are good, but careful comments are even better.

1)How can Council Tax Benefit be so much less than Housing Benefit? Only Owner-Occupiers can receive CTaxB without HB as well.

2) "only 3% of the benefits budget goes to people seeking work" is a very serious misinterpretation of 3% being JSA.Some job-seekers are claiming IS and many are also claiming CTaxB and HB.

1) Private and social housing tenants can/do receive CTB? It's all the same pot?

Council tax is probably on average say 10-20% of average rents?

So not sure what you are going on about here?

2) Well, remember the JSA criteria is quite specific. You have to be unemployed and seeking employment. People not in work could have access to other benefits.

In the same way that pensioners will on top of their 46% of welfare budget will also have claim to council tax, housing benefit and other allowances/benefits.

I think the key message of this chart is that most people think that the welfare budget is spent on the unemployed or long term sick when its actually mostly spent on the elderly.