"An Economy for One Nation: How Progressive can a Future Labour Government be"? 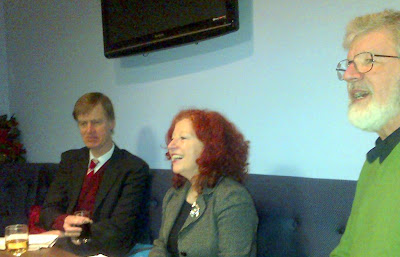 Picture of East Ham MP Stephen Timms and UNISON Head of Local Government Heather Wakefield (Chair Christopher Owens on right) at the Newham Compass & Fabians debate on how radical the next Labour Government should be.  This was held last month at West Ham FC supporter’s club.

Stephen spoke first on the central policy of the next Labour Government must be to cut unemployment. The Tory cuts had failed and resulted in no growth. Many people now beginning to realise that the cuts are not working.

The deficit had not been caused by overspending but by the collapse in the economy due to the financial crisis. He enjoyed seeing even Tories criticising government policies. If Labour are elected then there are limits to what we can do. Employment is key to fighting poverty. Labour will offer a guaranteed job for 6 months.

Heather introduced herself as a Chelsea FC season ticket holder who was pleased to be at West Ham! She was going to be more idealistic and talk about values. Privatisation of public services had led to reduced wages and badly run, inefficient services and greater income inequality.

We need gender equality as well as satisfying and socially useful work. Real workplace democracy. We need a partnership at work, a new deal with unions.

There needs to be a new attitude to taxes, ask what the economy is for and who benefits from it? A Green investment bank to make Government offices and homes energy efficient. Deal with tax havens. Raise a Robin Hood (or rather Maid Marian) Tobin Tax. Reform Council tax. Make sure that there is a minimum income for all.

We have the most expensive child care in Europe apart from Switzerland. Women suffer the most in terms of jobs and pay from Austerity. There has to be a Keynesian economic programme, we could invest in new homes. Ask should we have low pay or a living wage. Why do we subsidise Tesco with tax credits?

In the Q&A I asked the question that in line with Heather’s remarks about rethinking our attitude to taxes, we ought to be pointing out that getting the unemployed into work will cost money and that we have to accept that all of us will have to pay more tax in return for quality public services.

Heather was very positive in her reply while Stephen was a little more circumspect.
Posted by John Gray at Tuesday, April 16, 2013