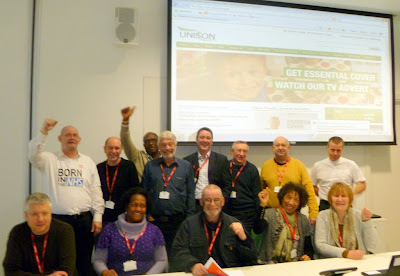 Every 3 months, following the meeting of our regional committee on safety, all London UNISON branch H&S officers are invited to attend a briefing by Thompsons on various safety related issues.

Gerard had been asked to speak about changes to the Criminal Injuries Compensation Scheme in 2012.

Now, I knew that this Tory led government, with the active support of the Liberal Democrats, had made changes to the scheme, but what I didn’t realise is just how bad these changes were, especially for those at work who are attacked and badly assaulted.

Gerard explained that under the new scheme, eligibility and awards have been slashed. Any tariff awards less than £2500 have been removed entirely. While compensation for the rest of claims have been reduced on average by 50%.

Which means that in the past if you were for example a healthcare assistant and you had been badly beaten up by a patient, which took up to 3 months to recover, you would have received under the old rules £1750 in compensation. Now you would get nothing.

In the past if you had been a teaching assistant and been assaulted and punched so hard in the eye by a pupil that it resulted in permanent blurred or double vision, you would have received £4,400 to £8,200.  Now you would only get 1/2 to 2/3rds of that amount. Remember this is for permanent injuries! Was £4,400 under the old system too much?

Even worse, it use to be the case that loss of earnings awards due to injury were related to what you actually use to earn before the assault. Now it is only at statutory sick pay levels.

The government has also made it far difficult to claim, reducing time limits, not allowing managers to report cases to Police and slashing time limits for appeals.

Of course it is not only employees who are suffering from these cuts but all victims of violent crime.

In a civilised society the State has an absolute duty to protect all its citizens from criminals and deal responsibly with the consequences of this criminality for those who have suffered from it. The only citizens this Government gives a damn about are the 13,000 millionaires who will be given £100k plus tax cuts in 4 days time.
Posted by John Gray at Tuesday, April 02, 2013