Hands Off our Union! Stop the hijacking of our democracy 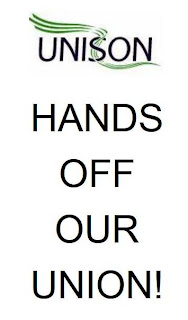 (Guest Post from Toni Collins). UNISON branches from across the country are reporting that local members of the Socialist Party and Socialist Workers Party - who are not members of UNISON and in some cases active members of the NUT, PCS and Unite - are leafleting workplaces in support of the so called "reclaim our union slate".

Whilst there is some logic in these actions - given that most candidates on the list are members of the SWP/SP even though it is fronted and held together by sycophantic patsies who are Labour Party members - their involvement is undemocratic and an unacceptable interference in UNISON's democracy.

Here's where those two organisations stand on the NEC elections and no UNISON member should be under illusion that it is the SWP/SP who are out to claim our union. It is time this blatant hijacking of our democracy is stopped once and for all and the election rules are revised to stop interference by outside organisations:

What a load of hysterical nonsense. Instead of whining about other candidates, why don't you details what YOU and your 'colleagues' have to offer?

john, i noticed jamietrot doesn't deny that his political masters are interfering in our democracy.

Why can't he use the link on your blog to find out about the offer of "the forces of light and reason"? http://unisonnecelections.blogspot.co.uk/

Firstly, I do not have any 'political masters', as you put it. I am a member of the Socialist Party and a trade unionist, this means that I am accountable to the members I represent, and nobody else. It is disingenous and frankly ridiculous to spread McCarthyite nonsense about either the Socialist Party or Socialist Workers Party being 'shadowy puppet masters' out to take control. This is not a Frederick Forsyth novel, I do not receive secret sealed orders from a central comintern. I answer to my members. I would however question how one may be accountable to their members alone if, for example, they are an elected Labour councillor however. Could there not be a possible conflict of interest there?

Jamie, why are you still a member of the Socialist Party after their horrendous inaction over 'SP bigwig' Steve Hedley's domestic abuse?

If I was a member of any organisation who supported his victim-blaming like the SP did (until they asked him to resign thanks to the pressure of committed feminists), I wouldn't be a member for long. But just add that onto that the growing rape-denial culture of the SWP (i.e. Martin Smith, aka. Cde Delta) and its' kangaroo-court of a disputes committee. In regard to the SWP's actions there, I'm particularly disgusted that a UNISON NEC member, Karen Reissman, would have the gall to chair the conference session that whitewashed Martin Smith's rape case. I thought even the worst of our union would be better than that.

Who in their right mind, aside from those stuck in the SP & SWP's cult-like fields of ultra-leftism, would give them the time of day?

The question then is, after everything that's came to light in the last few months from those rotten factions, how much more can their memberships put up with before they see the light and reason?

I daren't think. And that's why I won't support anyone on the ultra slate - if they had any backbone and even a vague sense of feminist politics, the non SP & SWP cohort on their slate wouldn't give them the time of day either!

1. are you a unison member or not? 2. Is it alright for non unison members to interfere in our internal elections?
3. so you don't accept democratic centralism then?

You do realise that you will be expelled from the SP if you don't even if you think their policy is wrong for the union?

Life is full of conflicts yet is inconceivable that the Labour NEC would instruct a Labour Councillor on how to act in an internal union matter on pain of expulsion.

Leninism is a hijacking of democracy. Above all, trotskyites are people who think the counter-revolutionary coup and mass-killing civil war that created the Soviet Union are models for others to follow.

On FB "I totally agree in Liverpool on Friday members of unite union outside the municipal building campaigning under the banner reclaim our union... Very undemocratic"

1. Steve Hedley was cleared of domestic abuse by both the police and his own trade union. He is not a member of the SP now anyway, having resigned while the investigation was carried out by the proper authorities.

2. Nobody here seems to have any idea what the actual definitions of 'ultra left' or 'democratic centralism' are, as they are both used erroneously.

3. I would dispute the claim that the Labour NEC would not expel a Labour cllr in the manner you describe. Say a Labour cllr voted against a Labour budget as it would result in cuts to union members jobs - they would be expelled in the same way the two Southampton cllrs were.

5. Why can't you lot just play fair? You claim to be the "forces of light and reason". Act like it. Campaign based on WHAT YOU HAVE TO OFFER THE MEMBERSHIP, not slagging off the other candidates because you disagree with them. We're all supposed to be on the same side you know...

Jamie, he has not been cleared by Police or union. The allegations were thought to be common assault so any charges had to be made within 6 months. There is a complaint outstanding to the Police that it should be ABH where there is no such time restriction. The union is also reconsidering the complaint.

Google ultra left and democratic centralism if you don't understand what they mean.

It means that you have to do what you are told in your union by your central party committee. The Labour councillors were suspended from their Group for breaking the collective responsibility of a decision that they took part in and not due an instruction of its NEC.

You are clearly not a member of unison and yes it is self evident that it is interference in the internal democracy of a union if non members take part in elections.

No, we are not on the same side. We will do our best for our members regardless of our politics. You would sell out members if you thought that it would advance the interests of the revolution by one iota.

Well yes actually, I have been a UNISON member for 15 years and a hardworking UNISON rep for 10. In fact it was what I saw as the inaction of the union leadership which led to me getting involved as a rep in the first place. Once I started to represent members I realised just how much they were being sold short by a layer of older ex-NALGO leaders who had got used to their little life of perks and jollies.

This also then subsequently led me to the Socialist Party, having felt betrayed by the Labour Party when they led us into an illegal war in Iraq. To me the SP were like the Labour Party SHOULD be - working towards workers common ownership of the means of production (which is what you seem to understand 'ultra-left' to mean... you're wrong), with a proper working class base that appealed to me rather than the silly trendy student politics of most left groups.

Ok, now to educate you on democratic centralism, as follows: The democratic aspect of this organizational method describes the freedom of members of the political party to discuss and debate matters of policy and direction, but once the decision of the party is made by majority vote, all members are expected to uphold that decision. This latter aspect represents the centralism. As Lenin described it, democratic centralism consisted of "freedom of discussion, unity of action."

That is basic democracy! Certainly more democratic than the Labour Party nowadays, where the district parties or Labour Party Conference itself holds NO policy making power! You basically have to do what you are told! So does democratic centralism mean that you have to "do what you are told in your union by your central party committee". No, no more than a member of the Labour party does. When I hammer out detailed negotiations regarding HR policies or health & safety, I don't have some kind of secret hotline to a shadowy central committee barking out orders to me in Russian. Like I said earlier, you really are living in the 1980s.

"yes it is self evident that it is interference in the internal democracy of a union if non members take part in elections." - how exactly are they 'taking part in elections'? They get a vote then do they? They get to fiddle with the ballot boxes and rig the vote? Grow up. Handing out leaflets in support of somebody is no more interference in union democracy than a non-Labour Party member handing out Labour leaflets in an election is.

As for your 'parting shot', sadly I feel you may be right in saying that we are not on the same side. By attacking the left rather than this vicious ConDem government you are making the same mistake Kinnock did in the 1980s. I may have my differences with others on the left, in the Labour Party, the Greens, SWP, CPB etc, but when it comes to the fight against the common enemy I am on the same side as them. Unfortunately while we were all out fighting the ConDems, you would be left behind making sectarian attacks on your own side while the Tories sneak in through the back door.

I don't hide behind "anonymous" titles.

I cannot be bought off, bullied, threatened, intimidated or provoked into making mistakes.

And that scares you.

Lenin was never involved in a democratic election in his whole life.

What hypocrisy and cant (with SHOUTING) from Jamietrot - or there again is it justbee or aa?

He claims not to hide behind anonymous titles, not to be scared or bought off - but posts autonomously? How pathetic?

These people are the wreckers and splitters of the Labour movement. They helped destroyed the Labour Party in the 1980s and in doing so they were the creature of Thacher and all she did to the working class. They have as much to do with socialism as Scientology has to do with religion.

They have done similar harm to the trade union movement and now want to destroy it.

Remember these extremists want Tories to be in power since they think it is more likely to result in "revolutions" They are real Cameron and Clegg lovers and don't give a toss about the working class.

It is good that this person admits that he and his kind will sell out all union members if they are instructed to do so by their party regardless of whether it is good for the members of not.

I'm not a fan of everything Labour Party but again I know that Labour Party members in Unison will vote on what they think is best for the union and not be told to do by the Party NEC.

Jamie or whatever his name is, admits that he will do what he is told by his party.

Never vote for these people since they will have to do what their party wants them to do and not want they think is best for their members.

This is important: He even admits that if you vote for him and his elk they will not represent you but will represent their completely weirdo Party views. Spread the word.