A thousand trustees for the LGPS 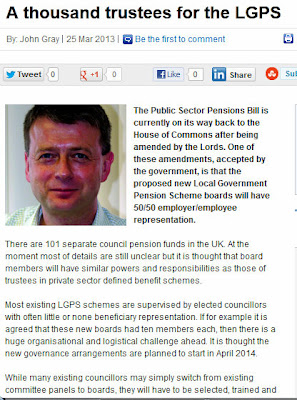 This is an article I wrote on behalf of the AMNT for Professional Pensions on the future Governance of the Local Government Pension Scheme.


"The Public Sector Pensions Bill is currently on its way back to the House of Commons after being amended by the Lords. One of these amendments, accepted by the government, is that the proposed new Local Government Pension Scheme boards will have 50/50 employer/employee representation.


There are 101 separate council pension funds in the UK. At the moment most of details are still unclear but it is thought that board members will have similar powers and responsibilities as those of trustees in private sector defined benefit schemes.

Most existing LGPS schemes are supervised by elected councillors with often little or none beneficiary representation. If for example it is agreed that these new boards had ten members each, then there is a huge organisational and logistical challenge ahead. It is thought the new governance arrangements are planned to start in April 2014.


While many existing councillors may simply switch from existing committee panels to boards, they will have to be selected, trained and supported in the new arrangements. Employees will in many cases have for the first time the right to representation and full voting rights.

I have been an employee representative on a London LGPS since 1996. At first for many years I was called an "observer" on the pension investment committee. This meant that I had no vote but did have access to papers, attend beauty parades, training and could ask questions to advisors and fund managers. This changed and now I and one other employee representative have two seats and voting rights on the investment panel and a seat but without voting rights on the formal council pension committee.

I would point out that we have never felt the need to actually force a vote at investment panel. Like the vast majority of private sector pension trustee meetings, issues are best dealt with by consensus whenever possible. I don't expect that to change with 50/50 representation.

This is a huge step change for employees and the local government trade union Unison is already planning an ambitious recruitment and training programme for representatives. With a 19.5% total contribution cap it is now very much in the interests of employees and employers to make sure the fund is well run and efficient.

Professional advisers and fund managers will also have change the way they do business with the LGPS. The issue of the merger of LGPS is separate.

Everything will have to change to some degree. I am also an employer trustee on a private DB scheme and it has been a very different experience to that in the LGPS.

It is vital that we get the LGPS governance arrangements right. Not only are four million people in the UK members but it is collectively the biggest funded pension scheme in the UK with around £150bn in assets. Meanwhile some senior members of the government have privately referred to the LGPS as the British sovereign wealth fund and hope it will invest more in housing and infrastructure to kick start the economy.

The AMNT welcomes this development which puts to rest this governance anomaly between public and private funded DB. Can the government now tackle the appalling governance gap in contract-based defined contribution schemes?

John Gray is chairman of the AMNT DB working group"