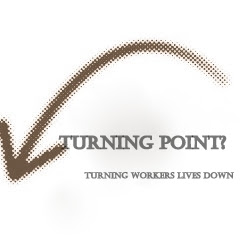 Today there is a strike by UNISON members who work for the National health & social care "charity" called Turning Point in Stoke and Staffordshire. They are holding demonstrations in Manchester and London.

While I think everyone understands that the voluntary sector is facing enormous pressures due to government cuts, it is completely unacceptable for the senior management of so called socially responsible organisations to decimate their employees wages and conditions while refusing to recognise or even negotiate with their trade union. This is at the very least a fundamental breach of human rights.

I have also seen some really inappropriate, threatening and nasty communications from Turning Point's Senior management which makes me wonder what are earth is going on in this organisation?

This is from West Midlands Community Branch "Members at Turning Point, who are former NHS employees, feel particularly betrayed as they are having hard earned TUPE protections swept away, including redundancy rights. The organisation has denied UNISON recognition although it transferred over by law under TUPE

• cut to all overtime pay
• cut in ‘sleep ins’, ‘on calls’ and other out of office payments
• stripping all staff of any enhanced redundancy payments
• cut in all unsociable hours payments meaning care staff will now be paid basic whether they work nights or days
• refusing to pay any future pay awards agreed by the NJC or Agenda for Change increments.

Its Chief Executive is Lord Victor Adebowale, who paid himself £165,000 and his three Assistants another £473,000 in 2012. Turning Point does not appear to be in financial difficulty as their most recent published accounts demonstrate with reserves of over £5M.

1. to withdraw the dismissal notices and new contracts that workers are being pressured to sign;

2. to enter into negotiation with UNISON to find alternative solutions".

Unite also have a campaign at Turning Point , there should be co-ordinated action between the two unions. The same true at One Housing Group that has an even larger surplus but is cutting pay as well. Unite and UNISON need to ballot, picket etc.. Together to get some traction out of these fat cats !

agreed anon. In my employer UNISON and Unite reps work really well together.

Its the best inter union co-operation I have ever known and yes, it does make a difference.