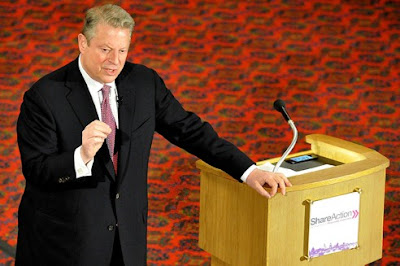 This post is about the speech that former US Vice President Al Gore gave at the ShareAction (formerly Fair Pensions) annual lecture on March 15 in the City of London Guildhall.

By coincidence I was sitting next to UNISON Assistant General Secretary, Liz Snape and her eldest daughter.

The Lord Mayor of London welcomed the (packed) audience to this historic site. Catherine Howarth, the CEO of ShareAction spoke about the dominate role that finance plays in our economy and the impact on democracy. Also what impact pension auto enrolment will have when many millions of people will become shareholders for the first time.

Then “The Al Gore” came onto the stage. I must admit that I didn’t know that much about Al Gore but you have to admire the massively impressive, articulate, passionate, old fashioned barn storming 30 minute speech he gave. He put nearly all UK political speakers to shame.

I hadn’t realised either that he had started off life as a Tennessee farmer and he gave a typical folksy small town America tale (“I’m feeling fine – don’t shoot me”) which I have heard before but never said so well, which was to amuse and relax the audience.

He then praised capitalism as the most efficient and superior economic system there has ever been, then tore it down by reminding us of its many failings such as its inability to measure what is truly important such as social well being and climate change. He asked why is the atmosphere used as a carbon sewer?

In the Q&A I asked him as a UNISON trade union pension trustee if the failure of pension funds to make long term sustainable investments is due in part to the decline in recent decades of organised Labour. In the past workers and managers worked together as partners. He said he had never been asked that question before but would think about it (which meant he either thought it was a brilliant unique insight... or that no other idiot had ever asked such as stupid question before). He did say that union nominated trustees can make a real difference to the way their funds are managed.

He asked us to think about what are the values in the boardroom you invest in, how does a company treat its employees and the communities where they operate. There should be a systematic investigation of sustainability factors as a necessary part of any investment process. The current system is functionally insane and incentives drive towards systemically irrational decisions.