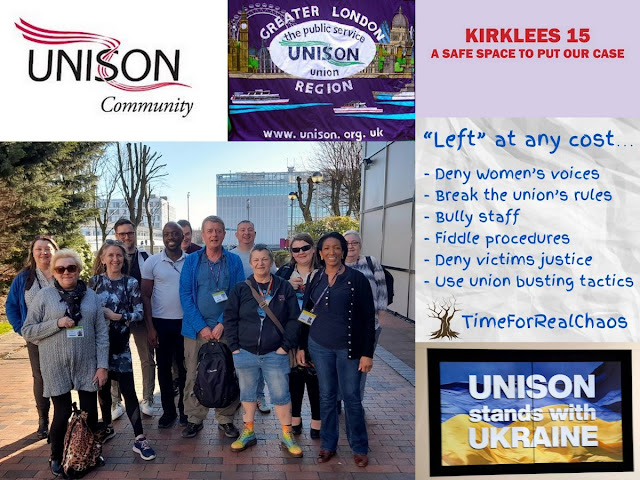 I was really pleased to be notified on Friday that I had been elected unopposed for the Greater London General seat on the UNISON Community National Service Group Executive.

This means I will represent all UNISON members in London who work in Charites, Housing Associations or the Third Sector. There are a number of national employers whose headquarters are in London and are therefore part of London region as well.

I am looking forward to representing the interests of London Community members at this national body and will do whatever I can to hold the present Community NEC members to account for their actions in particular the complicity and failure to stop the victimisation of the Kirklees 15.

This is about 14 female UNISON members and 1 male, whose complaints of bullying and harassment against our so called current "President" Paul Holmes, have been dismissed by our NEC without any due process for them. This is despite the fact that he has been sacked by his employer for bullying and harassing them.

I will also challenge them for supporting the bullying of UNISON staff, including threating to sack them, breaking the union rules, fiddling procedures and using "union busting" tactics against our recognised trade unions. Incredibly they have also failed to completely condemn Putin's fascist war of aggression against Ukraine.

(Picture of some of the many Community delegates who walked out of our recent conference in Glasgow last month when Paul Holmes was chairing it).