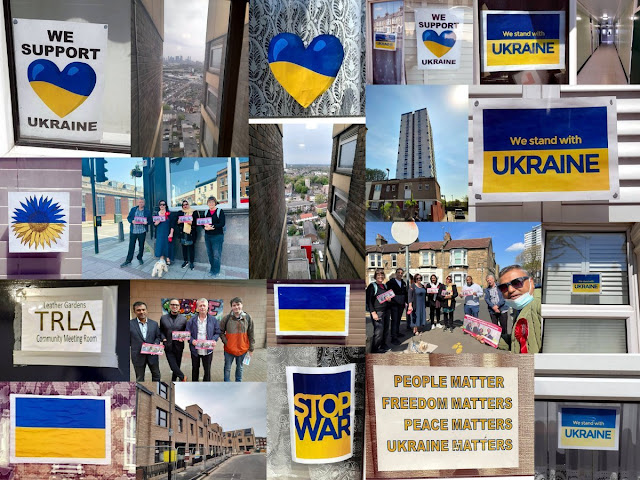 In West Ham ward we had a stall outside the station with Canning Town North and we did the two tower blocks in Leather Gardens (many thanks to Jordan from UNISON Voluntary orgs branch for joining us).

A pretty positive response apart from one resident who was very angry that he had not been able to move from his overcrowded flat and blamed the Council for this failure. I tried to explain that we have a massive housing shortage in Newham and we need a change of Government to solve this crisis but I knew he was so angry that he would not listen.

Today after picking up our new GTVO leaflets from printers the West Ham candidates myself, John Whitworth and Charlene Mclean had a last week of election planning meeting then I went to pick Lyn up for the PWCTE session.

This was another great canvassing session (with Cara the Labour attack dog) and I was very impressed with one street where they had so many pro Ukraine leaflets in their windows. They had also raised money for War relief charities. Well done!

In the afternoon I had the joy of Labour Group officers then a very good training on Election Day and "The Count".