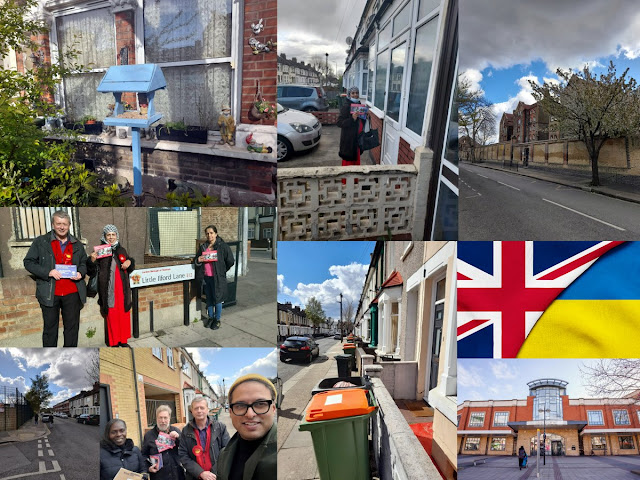 This morning I had my Councillor surgery at Stratford Library and spoke to two residents about complex housing issues, then I went and joined a canvass in Pond Road, West Ham E15. We made 59 contacts and had a overwhelming positive response but what was interesting is that I came across a number of voters who had previously been "Against" Labour but feel so let down by Boris Johnson that they now support us.

Amazingly, there was a bagpipe player, in full Highlander attire, playing music on the nearby Greenway overlooking the estate. I have no idea what he was doing.

Afterwards we had coffee at the Sawmill Cafe in Stratford, which is run by a Ukrainian family. It was wonderful to see the cards on the counter from local people to the staff supporting their nations battle against Putin's fascist aggression.

Next I joined a canvass team in Little Ilford run by new Candidate, Nur Nahar. It was one of the most successful campaigning I have been on in ages. Residents were really pleased to be contacted and Nur, who is a local NHS practice nurse, was simply amazing with them.

We had 130 contacts, overwhelmingly Labour. Little Ilford ward has a fantastic candidate team. Standing with Nur is Elizabeth Brooker who is a great organiser alongside a top trade union activist, Abul Bashar Syed.