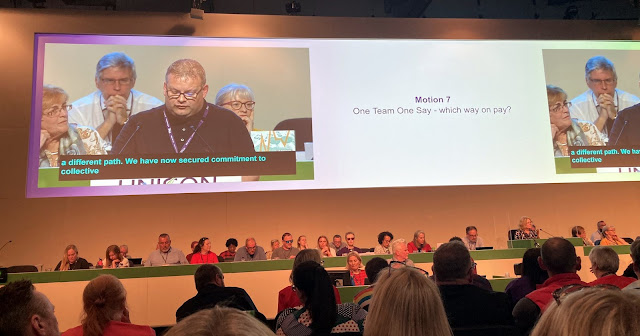 Check out this report in https://www.in-unison.org/

"The afternoon session of Day 2 of UNISON Health Conference concentrated on pay, terms and conditions. Conference agreed motions on moving to a 35 hour week and to campaign for an increase in mileage allowances for those required to use their car at work as fuel prices rocket. It is a fact that people are not now just paying to go to work but actually paying to do their work and are suffering real financial hardship as what they can claim for mileage allowance is now failing to meet the cost of petrol at the pumps. Conference further agreed to work with employers to develop an ethical on-call arrangement that ensures proper work-life balance and that all groups of staff are treated fairly. Conference also passed a motion to campaign against rogue employers who are trying to drive down Bank rates of pay below Agenda for Change rates while throwing money at agencies where the vast majority of money goes to private profit for big companies and not into workers pay packets.

Finally Conference agreed following a thoughtful debate to reinforce its position to this year which would include specific proposals to drive low pay out of the NHS and to support a flat rate principle as a key long term objective so as not only to win decent pay for all NHS staff but to ensure the gap between the lowest and highest paid does not widen as our union supports a One Team approach that equally values all of our members.. Card vote result the next morning was in favour".