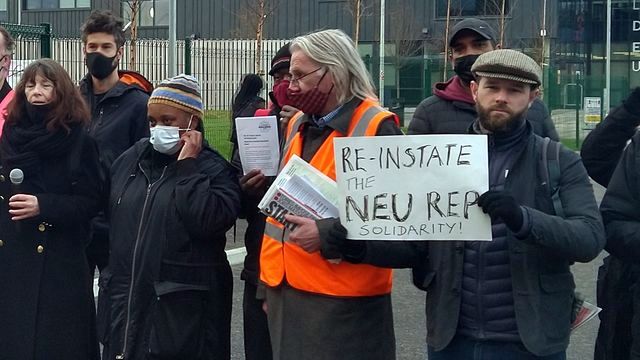 What a dreadful story. A teacher trade union rep sacked for undertaking a staff welfare survey. What bullying behaviour. Her union makes an emergency application to an employment tribunal which finds that the school has acted "morally reprehensible" and ordered the school to pay her full wages until a full hearing next year (which take it from me is a rare order by a tribunal. The evidence must be pretty overwhelming).

Check out the Newham Recorder story and sign the petition below:-

"At the start of this term, teacher and NEU rep Sharon Morgan was summarily dismissed from her job by London Design and Engineering UTC.

Sharon was sacked without due process, with no formal investigation or a hearing where she could put her case.

At an employment tribunal the judge described LDE’s behaviour as “morally reprehensible” and LDE subsequently agreed to reinstate Sharon. But the next day LDE changed their mind and refused to reinstate her.

In reality, Sharon was sacked for helping NEU members stand up for better working conditions for staff, in the interests of the whole school community. This is trade union victimisation and it’s unacceptable.

The sacking of Sharon is an attack on all trade unionists at LDE, in Newham, and everywhere".

The Claimant has asked for a written reason for the decision, are these public?

If someone took their employer to Tribunal, could it make it harder for a new employer to offer them a new job? As these decisions are public?

unless she fights this her reference will be rubbish anyway. at least she will now be paid until the full hearing. I hope the reasons are made public since it will show what a bad employer they are