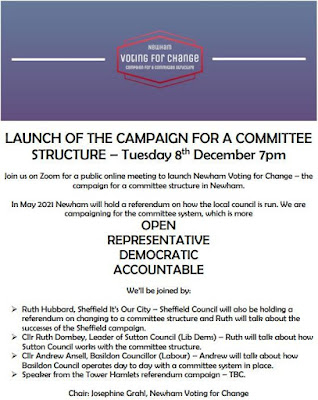 On Tuesday evening there was a well attended virtual launch of the Newham Campaign for a Committee Structure.

In May 2021 there will be a referendum of all Newham residents on whether they want to keep the Executive Mayor governance model or introduce a Committee model.

I missed the 1st half due to a trade union clash but below is the "Live Tweet" of the event @ForNewham.

Our launch meeting is underway…

Cllr Ruth Dombey of Sutton Council, which runs on the committee system, is telling us how it works in practice.

Cllr Dombey says ALL councillors are involved in decision-making through membership of committees. Scrutiny is good, but it’s done best when the decisions are taken.

Democracy is done best when it’s done in the open.

Helal Abbas from Tower Hamlets is next (former Labour Leader). They are having a referendum too, and he will be talking about campaigning to change away from their mayoral model.

Helal Abbas says he has experience under all three governance models, and the directly elected mayor is the worst, “electoral dictatorship.”

Cllr Andrew Ansell from Basildon is speaking now. His council has recently moved to a committee model. It was a way to empower councillors and involve them more in the decision-making process.

Cllr Ansell says there is more accountability and more transparency in the committee system.

One of the best things about the system is member engagement and participation. “Teamwork makes the dream work.”

Our final speaker is Ruth Hubbard from the Sheffield It’s Our City campaign, which collected 26,000 signatures to call a referendum to change from a leader/cabinet model to the committee system.

Governance is not just a technical thing, it’s fundamental to the life and values of a community.

Other ‘strong leader’ models are about executive power, concentrated in the hands of a small group of councillors

People expect that the councillors they elect will have a say in decision-making, but in strong leader models most don’t. The committee system empowers voters.

Inclusive decision making is better than scrutiny after the fact.

Cllr Bob Littlewood from Redbridge wishes our campaign the best of luck. He hopes his borough will follow our example.