"A Promised Land" by Barack Obama 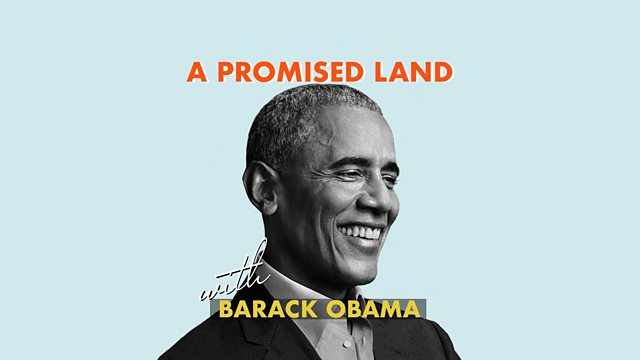 I listened to the final episode of Barack Obama reading from his first term Presidential memoirs, "A Promised Land" today on my smart phone and headphones while trying to walk off some Christmas cheer.

There are ten 15 minute abridged extracts on BBC Sounds (free and downloadable for another 5 weeks) here plus an interview with historian and broadcaster David Olusoga which helped to set the scene. I would suggest that you listen to this first.

The former President eloquently tells his story about the long hard slog he had to become the Democratic candidate then become elected President (with a little help from the Republican choice for vice President, Sarah Palin, who proved to be pretty useless).

I had forgotten that he was elected in the midst of the 2007 financial crisis and had to cope with the resulting economic downturn and grapple with continuing conflicts in Iraq and Afghanistan.

The passing of the so called "Obamacare" health bill was his greatest political victory but the loss of Democratic control over Congress meant that the Republicans could frustrate and block him implementing further significant reforms.

If being elected was tough then being President was even tougher with long hours, constantly making stressful decisions and much personal abuse. He was an early US champion on climate change, an improbable Nobel Peace Prize winner (bizarrely nominated after only 2 weeks in office despite being the "Commander in Chief" of American forces fighting two wars) but will always be remembered as the First African American President of the United States America.

A decent, thoughtful and pragmatic man, who I sense wanted to do much more but was constrained by the very deep political polarisation in American society. I look forward to reading his book (check out Newham Bookshop) and the next one on his second term.

Obama was so far from the Politics of the Labour Left its unreal. Your politics and Party are way more extreme, as you have often shown.

Nonsense while there are differences both democratics and Labour are board church left of centre progressives, social democratics and socialists. Democrats have Bernie and Labour has Jeremy. Republicans have Trump and the Tories have Boris. I am pretty sure Keir and Joe are politically very similar.

Dream on. That is laughable. You are deluded.
Corbyn was the "leader" of Labour and he had very little in common with Obama. Your politics in particular are far from the that of the US Democrats, and this is very clear from looking at your blog.

Well, like it or not but Bernie Saunders and Jeremy Corbyn have much in common politically and he came 2nd in the 2016 and 2020 democratic nominations.

As I said there are differences but remember Joe Biden and Keir Starmer have a lot in common.

You can't compares politics of the UK to that of the US. Socialism is a dirty word in the US (It may mean different things to them).

I liked Obama as an orator, but the legacy of his presidency was a failure, since he failed to see the despair of people who ended up voting for Trump. The same can be said for Tony Blair, as people were voting for Farage.

There is a big difference between health insurance and health care.

IN the UK, Corbyn was a man of the past. He was blaming rich for problems. However, on my street, it was the poor (who had been lucky to be given housing on my street) causing ASB and Corbyn was promising more money for that group, rather the families who went to work everyday on crowded trains. How did that play out with voters?.
There is something wrong, when good work of those who fight for social justice fails to lead to a better society.

The problem was never the rich (not entirely). It was the corporations. They are richer then most (wo)men alive. They have lobby companies working for them.

The rich men of the past, are all dead. Corporations never die, and will outlive most of us.

Corbyn wanted to increase taxes on the rich to 50% (this is on top of 20% VAT and NI at 11%). Whilst Corporation Tax is 20%. Why don't rich corporations who have a monopolistic position, pay more tax?. I am not anti-corporation, but some have monopolistic positions, where they thwart competition and influence Government policy.

The Unions have been silent over rising CEO pay. The CEO have been milking the companies, whist company profits have been lack lustre, so use that as an excuse to hold back wages of ordinary workers.

You have Len McCluskey, who are immoral and used their Union member's money, to help him buy a London home. Why does n't he live next to the workers he is representing?

You have a media, which is more interested in sensational gossip and ratings, rather then the truth.

Why are big tech investing in facial recognition?

I would rather see a million small business owners, then a few big corporations. Big companies should pay more tax, so that smaller companies have a chance.

Thatchers was a Green Grocer's daughter, but her father would not have had a business if Tesco had opened down the road.

As you are reading Obama.. always good to get different perspectives.

I like this guy..... I would love to have a conversation with him.

socialism is a dirty word in the USA (and mixed up with communism in the UK as well). But you are right that it means different things. Remember that Labour "owed more to Methodism than Marxism".

This is what you get with democracy. Progress then Reaction. Personally I never thought we would get a black USA President in my lifetime.

PBS "About 44 million people in this country have no health insurance, and another 38 million have inadequate health insurance. This means that nearly one-third of Americans face each day without the security of knowing that, if and when they need it, medical care is available to them and their families".

Corbyn and the wider Labour Party wanted to help the "many not the few" and the rich few should have paid for it. Including corporations.

The unions have not at all been silent over CEO pay. They have been largely ignored. Which is why it is so important to have a Labour government.

I may disagree from time to time with Len but I don't think at all he is immoral.

I would rather see far more small businesses as well. It is ironic that Thatcher's children are being sold out by this Tory government in favour of no tax Amazon, Google etc

Anon 29 makes a lot of good points. As for John's " a few of the rich would pay more" completely fails to understand that 1% are already contributing almost 30% of all income tax and even at that rate people start to naturally find ways to avoid paying more. Taxing Philip Green more wouldn't pay for 1 hour of the cost of running the NHS. There are only a few ways to sort this out..
Don't allow Governments and local authorities and the NHS and many other departments to frankly waste so much money.
Take more tax by growing the economy, by taxing consumption and sales transactions as well as profits.
Make it hard for Corporations to offshore their revenues (and this is not achieved by increasing Corporation tax) - we want all the Corporations processing their profits in this country and not outside it. So reduce the rate and stop them processing their profits through the Netherlands, Ireland and Switzerland.
Celebrate profitable businesses. Celebrate the jobs they create. Support them processing their profits here.

I think you are very naïve if you think the very rich all pay nearly 30% of their income in tax (especially Philip Green of all people).

The only waste I see in public service is the profit extracted by privatised services which is made worse by the poverty wages they often pay.

Yes, stop corporations earning billions from the UK but paying so little in taxes (unlike many small UK businesses). We cannot win a race to the bottom.

Businesses can only prosper if there are excellent public services to support them. Police, Health, social care, transport, courts...paying taxes buys civilisation.

Statistics are not your strong point John!

...and the english language is not yours. Crucial distinction between the 1% paying 30% of "their" income in tax...

THE top 1% of taxpayers are now paying almost 30% of all income tax, with the nation’s finances increasingly reliant on a small wealthy elite.

Its a fact..so you won't win the argument John. The great shame is actually that you didn't even know this.

"The top 1% of earners in this country are paying 28% of the tax burden. That is the highest percentage ever, under any Government."

apart from the fact that you still don't understand what was my actual point, is it almost 30%" or 28% or more than 33%? Just asking