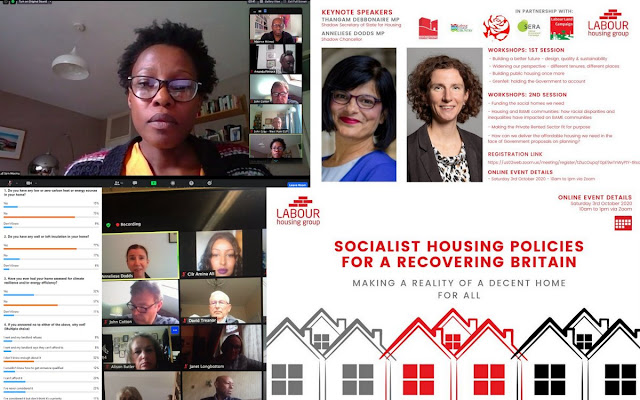 Yesterday (Saturday) was pretty much a Labour Housing Group day (LHG is is a socialist society affiliated to the Labour Party "we work within the movement, both nationally and locally, to develop and promote workable socialist housing policies through our members. If you believe another future is possible for our country and housing – become a member and join us in the fight"

We started with a national zoom seminar on "Socialist Housing Policies for a Recovering Britain". I gave a plug in the Q&A with our Labour Shadow Housing Minister, Thangam Debbonaire MP, for our Newham "Airspace" ambitions to build more homes on top of our our low rise Council owned blocks. Which will at the same time tackle climate change by the retrofitting of roofs and walls and also saving leaseholders bills from new roof maintenance.

Thangam said she would like to visit Newham to find out more which she will be more than welcome.

The workshops were fascinating and I wished I could have been at all of them.

You can get a taster of what went on at the twitter feed for the seminar here https://twitter.com/LabourHousing

Afterwards was the AGM of the London Branch of the Labour Housing Group were I was elected to its executive committee. There was also a great discussion on London housing issues with James Murray MP and others).

I will definitely be bringing up at the Executive the prospect of there being a Newham branch of the LHG since housing is such a crucial issue to us.

> ambitions to build more homes on top of our our low rise Council owned blocks. Which will at the same time tackle climate change by the retrofitting of roofs and walls and also saving leaseholders bills from new roof maintenance.


Given that Kensington where incompetent over Grenfell. They retrofitted these cladding and insulation material to save people in heating bills. Where did it all go wrong?. Councils have n't resolved the cladding issues over their own blocks.

Newham has been demolishing tower blocks in previous years and now it thinking of converting four storey council blocks in tower blocks?. What could possibly go wrong?

Many tower blocks have phone masts on them.

When you have used up every available space? Where will you be building homes?

Most of the new builds are concrete jungles.

Kensington wrapped Grenfell with flammable plastic to save money. As did a number of other local authorities, housing associations and private developers. Most of cladding issues in Newham are private sector. The "bonfire of elf & safety" regulations by Cameron probably did the most damage but the shoddy building practices of the past 20 years relates more to developers greed and being allowed to choose their own building control inspectors (deciding who is going to police you).

Airspace is about adding 1 or possibly 2 stories to low rise blocks not tower blocks. Many (not all) private sector developments (such as the awful Tory permitted development conversions) are awful but social homes will have better design and space standards.