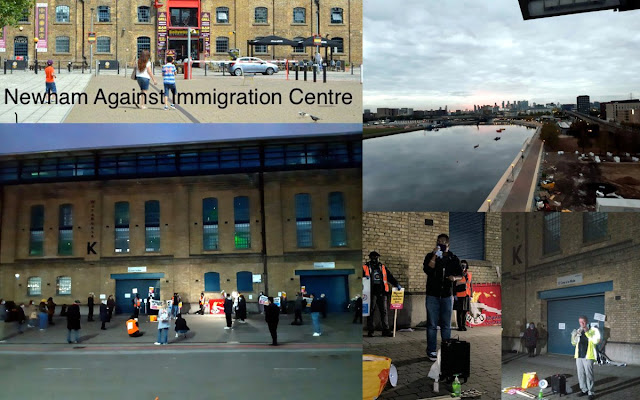 Yesterday evening I walked from Newham Dockside along Royal Docks to join Councillor colleagues and local residents protesting outside the historic Warehouse K which is the site of a proposed Immigration detention centre.

Local Newham Councillors have set up a campaign group - Newham Against the Immigration Centre https://twitter.com/NewhamAgainst

We joined a protest organised by the Newham Branch of the SUTR. Local Cllr Dr Rohit Das Gupta was the first speaker. He described how the local ward Councillors had met via zoom today with the developers to make clear their opposition to the proposal.

Councillors who are on the Strategic planning committee would not be able to attend since by law they have to remain completely neutral until they have heard the actual planning application. The application for a change of use into a 24/7 detention centre with 35 custody cells is thought to be heard next month.

There was a wide range of speakers addressing the protest. I spoke as Newham Deputy Mayor and made it clear that we are opposed to this "prison" being built in Newham and we will do everything we can do to stop it.  I also pointed out that this warehouse was built in 1855 for imported tobacco and therefore in all likelihood produce from American slave plantations was stored here and now the Home Office is proposing to jail migrants in the same building. This is an outrage.