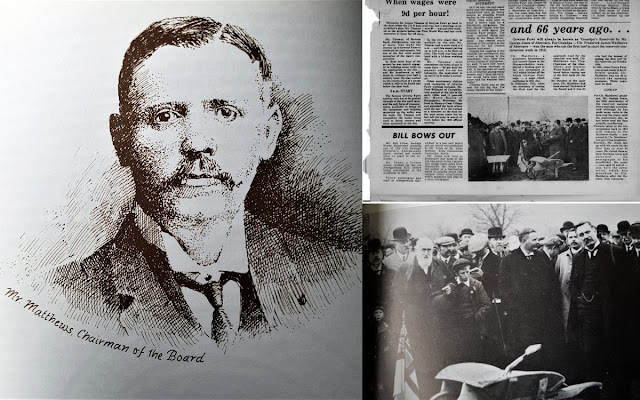 There is a lot of really nasty and unpleasant stuff on the internet and social media but there is also many positive things.

This week I was contacted by a long lost relative Graham via this blog who had searched the internet for his great uncle (Frederick John Matthews - my maternal grandfather or "Taid"  in Welsh) and found my post on his military service https://www.johnslabourblog.org/2020/05/ve-day-sgt-frederick-matthews-and-sgt.html

Today Graham sent me a fantastic email with photos and scans of our family history and also of my Great Grandfather, Frederick (Frank) James Matthews who was also a Councillor for many years in South Wales. I had no idea that apart from my Father (who was a Councillor for Buckley District Council, North Wales in the 1950s) that anyone else in my family had served in this way.

The newspaper report above has a picture of Frank at the opening ceremony of the construction of a much needed fresh water reservoir in 1912 (October 16!). I am not sure who exactly is Frank in the picture but assume it is the big chap with the big white beard.

UPDATE: No, the chap with big white beard was the chief engineer, Frank is as above in new college (definitely a Matthews)