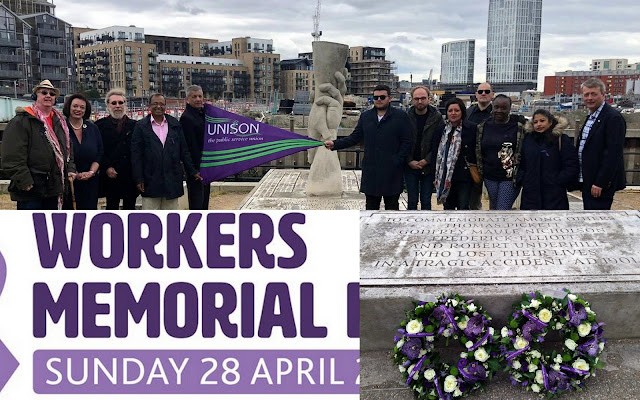 Today we remembered four local workers who in 1901 selflessly lost their lives,  while trying to rescue a colleague who had collapsed from poisonous fumes, whilst inspecting a ventilation shaft in what is now "Three Mills Green park".

This annual memorial event is organised by my trade union branch, Greater London UNISON Housing Associations, but Workers Memorial Day is an international event supported by the UK Government, remembering those who have been killed while at work or have died of work related illness or injuries.

There were a number of speakers including UNISON members, West Ham MP,  Lyn Brown and Newham Mayor, Rokhsana Fiaz.

Lyn reminded us that  today we should also remember the Northern Irish journalist, Lyra Mckee, recently murdered at her work.  Rokhsana said that at the 1901 inquest into the deaths of the workers the employer was blasted for ignoring basic health and safety rules which resulted in their deaths.