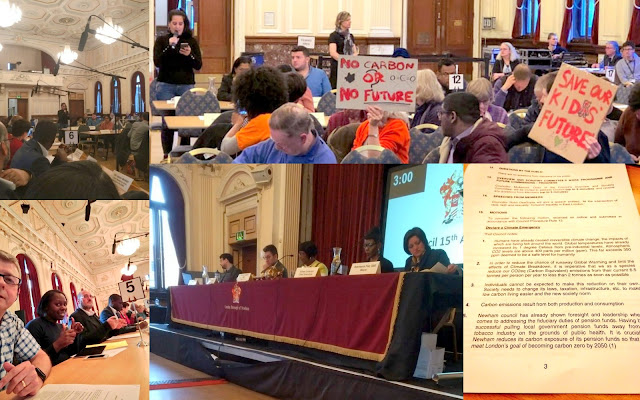 Many thanks to Fossil Free Newham. Now to implement. 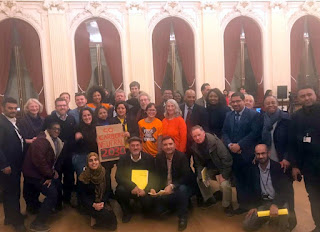 1. Humans have already caused irreversible climate change, the impacts of which are being felt around the world. Global temperatures have already increased by 1 degree Celsius from pre-industrial levels. Atmospheric CO2 levels are above 400 parts per million (ppm). This far exceeds 350 ppm deemed to be a safe level for humanity

2. In order to reduce the chance of runaway Global Warming and limit the effects of Climate Breakdown, it is imperative that we as a species reduce our CO2eq (Carbon Equivalent) emissions from their current 6.5 tonnes per person per year to less than 2 tonnes as soon as possible

3. Individuals cannot be expected to make this reduction on their own. Society needs to change its laws, taxation, infrastructure, etc. to make low carbon living easier and the new society norm

4. Carbon emissions result from both production and consumption

5. Newham council has already shown foresight and leadership when it comes to addressing the fiduciary duties of pension funds. Having been successful pulling local government pension funds away from the tobacco industry on the grounds of public health. It is crucial that Newham reduces its carbon exposure of its pension funds so that it can meet London’s goal of becoming carbon zero by 2050 (1)

6. Unfortunately, our current plans and actions are not enough; in Newham asthma remains one of most prevalent diseases of its constituents after diabetes, therefore it is in the public’s best health interests to further address air pollution and climate change (2) More needs to be done to improve existing infrastructure so that innovations in energy, alternative transport (e.g. electric car charging ports) and waste management can become more accessible to the majority. The U.K. is currently at risk of falling short on its carbon targets for 2023-2027, despite renewable power generation reaching its highest peak in 2018 (3)

7. The IPCC’s Special Report on Global Warming of 1.5°C, published last year, describes the enormous harm that a 2°C rise is likely to cause compared to a 1.5°C rise, and told us that limiting Global Warming to 1.5°C may still be possible with ambitious action from national and sub-national authorities, civil society, the private sector, indigenous peoples and local communities (4)

8. City and local Councils (5) around the world are responding by declaring a ‘Climate Emergency’ and committing resources to address this emergency. (6)

1. All governments (national, regional and local) have a duty to limit the negative impacts of Climate Breakdown and local governments that recognise this should not wait for their national governments to change their policies. It is important for the residents of Newham and the United Kingdom that cities commit to carbon neutrality as quickly as possible

2. Cities are uniquely placed to lead the world in reducing carbon emissions, as they are in many ways easier to decarbonise than rural areas- for example because of their capacity for heat networks and mass transport

3. As Newham was instrumental in the set-up of the London Collective Investment Vehicle (LCIV), it is our duty to be a leader on environmental issues in the U.K. and ensure this is reflected in investment strategies for both Newham and London going forward (7)

4. The consequences of global temperature rising above 1.5°C are so severe that preventing this from happening must be humanity’s number one priority; and

Full Council calls on the Mayor to:

1. Declare a ‘climate and health emergency’;

2. Pledge to make the London Borough of Newham carbon neutral by 2030 and carbon zero by 2050, taking into account production and emissions8

3. Call on and work with other London Boroughs to pool power and resources together to make 2030 target possible

4. Call on Westminster to provide power and resources to make 2030 target possible

5. Work with other governments (both within the U.K. and internationally) to determine and implement best practice methods to limit Global Warming to less than 1.5°C.

6. To commit to a Green audit of all council services to ensure that weight is given to the environmental and sustainability impact as well as cost.

7. To provide air quality monitoring devices in all schools.

9. Council must lead by example to remove single-use plastic items from their premises.

10.Council to encourage plastic-free initiatives such as Surfers Against Sewage/Plastic Free Royal Docks, and support events intended to promote plastic reduction in the Borough.

11.A representative of the council must be named on the Surfers Against Sewage/Plastic Free Royal Docks steering group.

Check out motion on line and references
Posted by John Gray at Monday, April 15, 2019