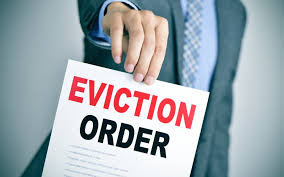 Great news that the Government is considering ending Section 21 "no fault evictions" of tenants who pay their rent, don't cause a nuisance and respect their property.

This is a major victory but we need to make sure that this current Conservative Government can deliver on this promise and that "revenge evictions" by landlords who will simply lie about the reasons they are evicting are also ended.

By coincidence my UNISON branch has submitted a wide ranging motion on reform of the Private Rental Sector (see below) to this years National Delegate Conference and it has passed Standing orders committee!

1) That the number of households in London who rent from private landlords is up from 15 per cent in 2000 to 27 per cent in 2017 and that Shelter forecast that nationally this growth will continue;

3) High rents in this sector cause hardship for tenants and leads to the taxpayer subsidising private landlords via housing benefit;

4) Shelter believe that the reasons behind Conservatives losing seats in Canterbury and Kensington is due to the number of private tenants voting against them (the “rent quake”);

5) In the devolved nations “No fault” evictions and “Right to buy” have been abolished or restricted.

a) To hold a national wide campaign day in 2019 for proposals to improve the private rented sector;

b) To produce campaign materials for branches on the private rented sector;

c) To campaign and support calls for an end to no fault evictions and rent controls for the private rented sector;

d) To produce guidance for all branches on how the Letting Fees bill currently in Parliament should be enforced by local councils;

e) To ask Labour Link to support manifesto commitment for the reform of the private rented sector;

f) Campaign for all local authorities to be able to suspend right to buy in their locality due to housing need;

g) Campaign for all local authorities to be able to introduce licensing of all private sector landlords. Housing Associations
Posted by John Gray at Tuesday, April 16, 2019