Vote Rokhsana as your Labour candidate for Mayor of Newham 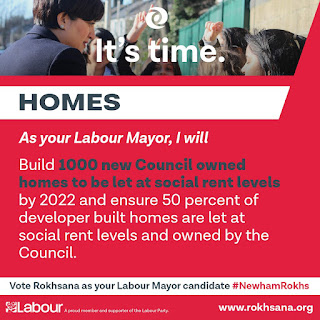 Vote Rokhsana Fiaz as your Labour candidate for Mayor of Newham

I’m Rokhsana and I’m asking you to vote for me as your Labour candidate for Mayor of Newham. You can read more about me and the detailed plans for Newham here.


From tomorrow, you'll be receiving details about how to vote from the Labour Party, so keep an eye out for your letter in the post!

This selection is a choice between Newham as it has been, and Newham as it needs to be. It’s time for a fresh start, a new vision, a different way of doing things.

It’s time to put our people at the heart of everything we do as a Labour Council by democratising how we do things for and with them.

As your Labour Mayor, housing will be my top priority. I will embark on the most ambitious programme of building new Council homes at affordable social rents for a generation - so that our residents can stay in Newham. This means:

There will be:
I will start:

Read more about my plans for housing below.

With me as your Labour Mayor we can show what great things Labour in power, working together with its people, can achieve locally.

Please give me that chance to be that Mayor. I will work hard for you, your family and everyone in Newham.

There is a housing crisis in Newham and many of our residents cannot afford to live here anymore. Nearly 24,000 people were on Newham’s Housing List and around 4500 households were homeless in September 2017. But Newham has the land to build over 35,000 homes over the next 10 years.
As your Labour Mayor, I will embark on a programme of building new Council homes at affordable social rents so that our residents can stay in Newham.
I will also: