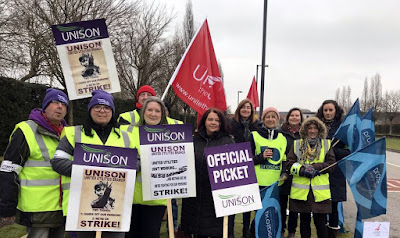 "UNISON members at United Utilities are on strike to defend their right to a fair pension. It’s not a decision they’ve taken lightly, but the staff of the UK’s largest listed water company face being hammered by pension proposals that could leave some as much as £10,000 a year worse off.

These attacks are completely unwarranted. In the past five full financial years, United Utilities has earned £1.6 billion in profits, whilst over a billion was paid out in shareholder dividends over the same period. In 2016/17 their two most senior staff – CEO Steve Mogford and CFO Russ Holden – were paid more than £4 million between them.

Clearly then, this is not a company that’s short of cash. It’s a company that chooses to prioritise massive dividends over their obligations to long-serving staff.

In fact, the pension scheme will be in surplus by 2020 according to current projections – this is a healthy scheme, where (due to changes made in 2010) members are already paying more for less. This isn’t about saving the pension scheme, it’s about cutting pension costs at a highly profitable business.

The impact on individual United Utilities workers will be devastating. A 60 year old employee, who has worked there since leaving school and earns £30,000 a year will lose £2,500 a year on retirement. A 40 year old in the same position stands to lose even more – a whopping £9,200 a year.

That’s why United Utilities members are taking action today, and on Monday, to defend the pensions they’ve spent years paying into. Every one of UNISON’s members stands by them as they fight for a fair pension and the decent retirements they’ve worked so hard for".
Posted by John Gray at Monday, March 19, 2018