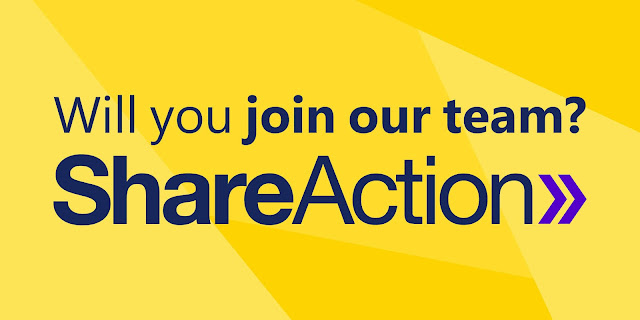 If you have a pension or insurance policy you may in law have duties and responsibilities for the companies your scheme owns and invests in. If you own it then you can't just moan about it without doing something about it...

"This is Michael writing from ShareAction. I’m our new Shareholder Activism Coordinator and am moving full steam ahead in organising our AGM activism over the coming months.

This is beginning with training sessions for new and existing AGM activists – can you help us promote these? They are as follows:

AGM activism is a winning tactic, and any individual can participate in it. Tesco recently committed to using 100% renewable energy and one third of the UK’s top 100 companies have become living wage employers. AGM activism played a major role in making this happen.

If you have any means through which you’d be to promote these trainings that would be brilliant. The more skilled-up AGM activists we have, the more effective responsible investment becomes, and our movement expands.

To make things easier for you, here’s some template tweets you can use:

Want to challenge the CEO of Shell in person? Come along to @ShareActionUK's #Climate themed #AGMActivism session >> http://bit.ly/2FYeURd

It would be great if you could help spread the word!