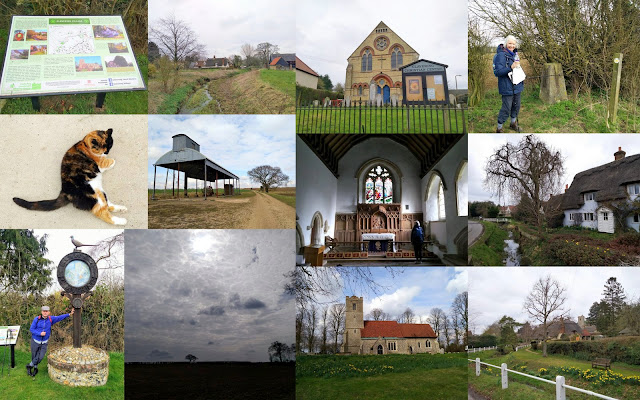 Off message,on Sunday I had my first day off from politics and the union for a long time. I downloaded this 8.5 mile circular route from the free website Essexwalks.com and Gill and I drove to Clavering near Bishop Stortford about 45 minutes from East London.

The weather started off dry, cold and overcast but brightened up in the afternoon.

The walk went through the chocolate box Essex villages of Clavering, Arkesden, Wicken Bonhunt and Rickling.  By the end of the walk you become somewhat bored by over exposure to beautiful thatched cottages, babbling streams, Essex big skies and ancient deserted churches. It was quite undulating terrain for Essex but nothing too hilly. .

We stopped for lunch outside St Margaret's Church in Wicken Bonhunt. Inside the Church there was a plaque recording villagers killed in the First World War.  24 men from such a small community compared to 5 in the Second World War. Many had the same surname. 4 had the surname "Banks", 2  "Johnson", 2 "Kettridge", 2 "King", 2 "Perry" and finally 2 had surname "Stanley" (there was even one "Arthur Gray"). Some families must have lost all their sons.

For some much older history check out "The Domesday Book refers to the separate manors of Wica and Banhunta. It records that Saxi, a free man, held Wicken before 1066 as a manor for 3 hides and 13 acres with 9 villagers, 8 smallholders and 3 slaves with 2 ploughs in lordship plus 3 men’s ploughs. Woodland supported 100 pigs, 1 cob, 40 sheep and 36 goats. Its value is given as ‘always £7’".

Who knew the Saxons had slaves in England.

We hardly saw any other walkers. Apart from the big fat cat we did see wild deer, Mad March hare and bumblebees.While there was also a cacophony of nest building birdsong. Some unwelcome rumbling noise from the M11 and Stansted airport planes but overall it was a lovely and relaxing walk. Strongly recommended.
Posted by John Gray at Monday, March 26, 2018