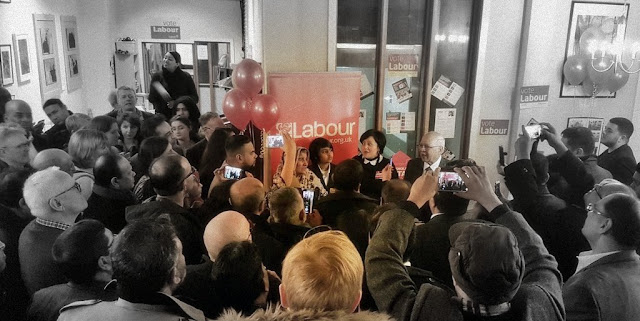 This is a really lovely picture from Roksana's "thank you" party for supporters which took place last night at our campaign HQ in Canning Town.

Despite the cold and the snow the venue was packed out with happy and enthusiastic supporters from all parts of the Newham Labour movement family.  Rokhsana gave a well received speech on unity, determination and wanting not only a different style of politics in Newham but policies that make a difference. She had her Mum and Dad either side of her as well as nieces and nephews.

It was great to meet up and celebrate with the many colleagues and comrades who have long argued and campaigned for change in Newham politics and have now finally achieved their goal.

The overriding emphasis is now on getting Rokhsana and our Newham Labour Party Councillor candidates (I declare an interest) elected on May 3rd.

An an entirely unintended consequence of this whole Mayoral selection contest is that we will unite (99%) as a Party around Rokshana and now in Newham we are one step ahead since we have so many experienced and "battle hardened" campaigners.