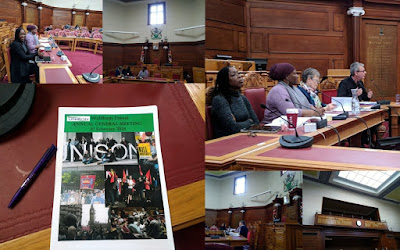 Last week I was honoured to be invited to be a guest speaker at Waltham Forest Local Government branch AGM. This was my speech.

"Thank you Chair for inviting me and giving me the opportunity to speak today about a mixed bag of important issues:- the importance of UNISON Labour Link, encouraging diversity in UNISON and what to do about the housing crisis in London.

Firstly, a little bit about me. I actually live in Newham but only about 200m from the boarder with LBWF and I work in social housing.

I used to work for Tower Hamlets Council and was a shop steward then eventually a local government assistant branch secretary for many year but was tupd over in 2007 to a Housing Association.

I am now the branch secretary of the London Housing Association branch, your London UNISON regional lay treasurer and Chair of the London UNISON Labour Link Committee. I also happen to be the UNISON NEC member for Community and in my spare time, a Labour Councillor for West Ham ward in Newham.

Let me start by talking about UNISON Labour Link. I think that people should never forget that it was the trade unions who were the driving force behind the creation of the Labour Party in the early 20th century. The unions realised that they had to have a political voice and legal support in Parliament in order to defend workers.

In UNISON you have a choice of 2 separate political funds to join. Whether to affiliate to the Labour Party via affiliating to Labour Link or into the non Labour Party “General political fund”. It is your choice unlike many other trade unions and I fully respect the wishes of members who want the union to campaign but do not support the Labour Party.

To complicate the matter the arrangements will change in future months because the Tory anti trade union act passed last year, is trying to damage the Labour Party by making it difficult for unions to fund the Party but this basic separation and choice will remain.

But let me make clear the role of UNISON Labour link is not just to support the Labour Party locally and nationally, it is to change the Party, and make it electable again by being more pro-worker and pro-union. The way to do this is not for the unions to just offer warm words and wave cheques but to encourage rank and file members to join and fully participate in the Party.

Look, the Labour Party is not and never has been perfect and did lose its way for many years. However, to be clear, I firmly believe that the worse day of any Labour Government is far, far better than the best day of any Tory government.

You as local government workers know this better than most. Not only have you had 8 years of Tory austerity forced on you, 8 years of effective pay cuts, 8 years of job cuts, 8 years of massive rises in rents and mortgages, but you are trying heroically to deliver services to your residents with budgets slashed and ripped to pieces. You see, this should be of no surprise to you because this is what Tories do when in power. This is why the unions had to have a political voice at Parliament. This is why you need to join the Party and campaign to put Jeremy Corbyn into Number 10 Downing Street ASAP.

Next a little bit about getting more involved in UNISON especially in all our self organised groups. There is a brilliant course run by London UNISON called “lost in Unison” and I recommend it if you are considering getting more active in the union, since to be honest, it is more than a bit complicated. We activists speak too much jargon and frankly, we just put off ordinary members from participating and becoming active.

Remember, many of you may not want to be a shop steward or a safety rep but you have the skills and life experiences necessary to offer to the union, whether that is by for example helping to organise Black members or young members in the branch. I am sure that your branch will be more than happy to speak to you and advise you on who to become more active not only in the branch but the region and national unison.  Your London UNISON convener for Equalities is Liz Baptist who is standing for Labour in Waltham Forest in May.

Finally – the Housing Crisis in London and what can we do about it. LG workers have had a double whammy of massive pay cuts and massive increase in housing costs.

Look, we all know that the fundamental reason for this housing crisis is political. The Tories simply do not believe anymore it is the role of the state to intervene in the Housing market and it is down to individuals not the state to provide housing and people will have to afford what the market dictates and like it or lump it.

So we need a change of government for any long term solution. It is not enough for us to just sit on our hands and wait for Jeremy to become Prime Minister. But it is difficult since the only way you can build truly affordable homes for rent and sale in London is if someone steps in and pays a subsidy or a grant to bring down the cost of that home.

So until we have a Labour government, who will tax the better off and the rich to provide that subsidy we have a problem. But you can make changes and if I can give some examples of the changes that you, here and now can do to make a difference, not fundamental change, but make a difference by working with your local Labour party and unison.

In Newham there was a large key worker project for public sector workers including many local government care workers. The housing association, One Housing is the landlord and they proposed to increase overnight rents by up to 40%. I was proud to support the residents with the help of Labour Party activists, Councillors and other trade unions to fight these proposals and with a couple of months, One Housing put the rent rises were put on hold. To be clear this was the resident’s victory since they self organised but it is an example of what unions and Labour party members can achieve.

Another example was a recent planning victory in my ward west ham. There was a proposal to redevelop the Ford motor showrooms and only 25% were to be “affordable”. Local Labour Party including UNISON members of my own branch led the fight against the developers and we demanded at least 35-50% affordable and I am pleased that the planning application was knocked back at the last committee meeting. I told the developers that we want to work with them, we don’t want a large plot of building land lying empty but we will fight you every step of the way, if you don’t include enough social housing. I think they got the message.

So, finally my message to you all is don’t get angry with this Tory Government, get organised. Organise in UNISON and get organised in your Labour Party and I hope to see you all at a victory rally for Prime Minister Corbyn, sometime very soon".

Later this month I will be speaking at the Richmond Local Government AGM and debating consequences of Brexit with Vince Cable MP. My own branch AGM on 20 March will take place in the House of Commons and we have Angie Rayner MP as our guest speaker.
Posted by John Gray at Saturday, March 03, 2018