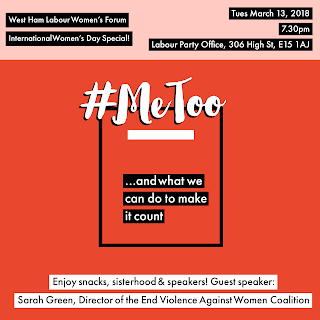 Please join us next Tuesday 13th March as we celebrate International Women's Day with Sarah Green, the Director of End Violence Against women Coalition. Kick off will be 7:30pm, at West Ham Labour HQ, 306 High Street, Stratford E15. The closest tube station is Stratford Station and Stratford High Street. Please let me know if you have any accessibility requirements.

Please feel free to arrive before for some networking and drinks.

Encourage her to stand!!!

Yesterday you all should have received an email from London Labour Party announcing that they are re-opening the selection process to women in Newham. We desperately need more women on Newham Council. If you're eligible ( to apply you need to be a woman, a paid-up member since at least 1 January 2016 and resident in Newham since at least 1 January 2017.)  Please do consider standing and encourage your local Labour sister to apply. If you have any questions about the process please do drop me a message.

We also have our Annual General Meeting (AGM) coming up after the local elections in May (some branches will be holding their AGMs after the elections too) At an AGM you'll be electing branch/forum officers as well as nominating officers for West Ham Constituency Party. All positions are up for elections. If you haven't been notified of your AGM yet please let me know and I can put you in touch with the secretary.

As Women's Officer it is part of my responsibility to encourage gender equality in the CLP as well as encourage sisters to be more active in the party whether that's coming out campaigning, attending branch and CLP meetings or standing for positions. Here is some more information

Branch/Forum  Officer Positions
There are 4 positions and at least 4 of the officers shall be women. There is no reason why job share can't be introduced if you have caring responsibilities.
Branch Chair
Branch Vice-Chair- in West Ham Ward we had to lovely members job share this position
Branch Secretary
Branch Treasurer
Branch Organiser - for organising campaigning and leafletting sessions. This is going to be a key position in helping us get Sadiq Khan elected as London Mayor

General Committee Delegate (GC) Positions:
The GC plans and coordinates our local Labour activity and meets on the 4th Thursday of the month. All party members are welcome to attend, but only delegates are able to vote on issues put to the GC.
The Secretary is automatically a delegate, plus one man and one woman per 25 members or part thereof.

Forum/Affiliated Groups to the CLP
All Forums and Affiliated groups will follow a similar election as above. Holding an election for:
Forum Officer positions
Two GC delegates and one EC delegate
Nominating members to West Ham CLP positions

Have a lovely week and I look forward to seeing you on next Tuesday!