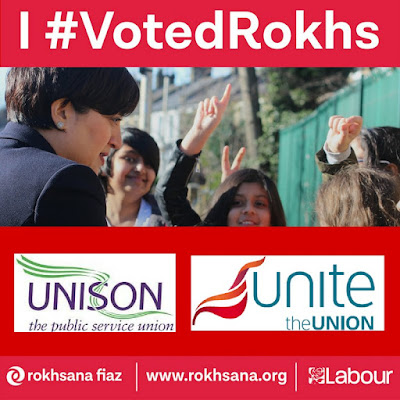 Both UNISON and Unite have officially endorsed Rokhsana Fiaz as the Labour candidate for Newham Mayor in May.

Unison “Greater London Region UNISON Labour Link is pleased to support our union member, Rokhsana Fiaz, to be the next Labour candidate to be Mayor of Newham. Rokhsana’s manifesto is fresh, innovative and full of policies that Unison supports including building more homes at social rent & insourcing of public services”.
Yvonne Green, Greater London UNISON Convenor

Unite: “Unite are pleased to support Rokhsana Fiaz in the selection as Labour candidate for Newham Mayor”

It is time to build Newham’s future together: Please get in touch, Rokhsana would like to hear from you

Promoted by John Gray, on behalf of Rokhsana Fiaz who is seeking to become Labour’s candidate for the Mayor of Newham, at 59a Woodford Road, London E7 0DJ