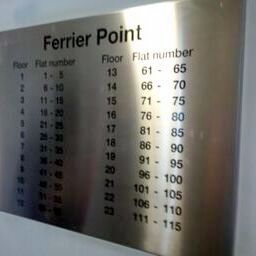 This is the latest media release from Newham Council (see below).

I am still waiting for copies of the fire risk assessments for high rise blocks in my ward (West Ham) from the Council.

I have also asked who is checking the fire risk assessments for high rise blocks controlled by Housing Associations and privately owned/leasehold blocks in Newham.

By coincidence, last month during the General Election campaign, I was part of a West Ham Labour Party Canvass team, who knocked on every door in Ferrier Point. It appeared to me at the time to be in good condition internally with nothing really obviously wrong. I did not of course have any detailed risk assessments or other technical information on the block.

As someone who has direct experience of managing high rise blocks and is a member of IOSH (Institute of Safety & Health) , trained in checking risk assessments, I have also had conversations with the lead Council Executive advisor for Newham Housing, Cllr Terry Paul and other officers.

I understand that the London Fire Brigade are satisfied so far with the control measures put in place by the Council in the 3 blocks identified so far with cladding that has failed safety tests. I am satisfied with what I know so far, but once the immediate crisis is over, we need to find out what went wrong and who is accountable.

Yesterday evening I was at a meeting of West Ham One Housing Group TRA, where we had a really constructive debate on Grenfell and its aftermath. Tenants are really worried about the safety of their homes.

The one and only positive thing about this is the way that ordinary working class people across the country and beyond have rallied around the victims and their families.

Check out this post here on Forest Gate North by local Councillor, Seyi Akiwowo, on Grenfell issues in her ward.

"Following the tragic fire at Grenfell Tower in West London, Newham Council is in the process of inspecting all tall buildings, prioritising those with cladding. There is no immediate risk to the safety of any of them that would lead to residents having to leave their homes.

Last week, we sent a sample of the exterior cladding from Ferrier Point, Nicholls Point and Tanner Point for expert testing. Although the cladding failed the test over the weekend, the council has confirmed that the insulation material used in the cladding on your block was of higher quality to that used at Grenfell Tower as it is made of Rockwool which offers more fire protection.

Because overall the samples of cladding failed the test, we have employed an external contractor who has been visiting all three blocks today to assess the removal of the cladding and how quickly this can be done.

This weekend, London Fire Brigade (LFB) along with Newham Council has carried out a full fire safety inspection of the three buildings and a sample of individual flats within the blocks. We have agreed a number of immediate actions which include:

· Extra security is in place in these three blocks 24 hours until further notice. This extra security will patrol the blocks every 20 minutes so they will be able to raise the alarm in the event of a fire
· Clutter, including some personal possessions such as bicycles have been removed to safe storage.

All residents living in these blocks have been written to and visited wherever possible to outline the actions the council and LFB have taken. We have reassured the residents that these additional actions, along with safety measures that are already in place, including smoke alarms in every flat and high quality fire doors, means there is no immediate risk to safety and no need for people to leave their homes, unless otherwise notified.

There are some additional matters we are addressing around the blocks, including vandalism, rough sleeping and issues such as smoking in stairwells and corridors. We have also reminded residents of the London Fire Brigade’s current safety advice following the Grenfell Tower fire.

Essential works will begin immediately to enhance fire safety with further upgrades taking place over the next few weeks, including dealing with the cladding.

We have thanked them for their patience and apologised for any inconvenience that future work may cause. We will keep them informed of all further developments.”
Posted by John Gray at Tuesday, June 27, 2017