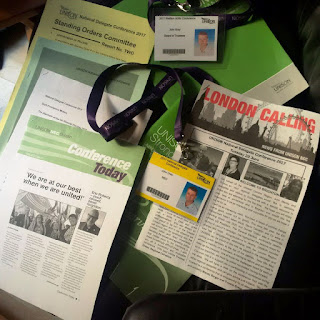 My Conference day started with a short jog up and down the famous Brighton beach. The weather was hot even at 7.30am.

At 8.30am we had our first UNISON NEC meeting to discuss and (hopefully) agree on any outstanding matters or policy positions.

Conference itself starts at 10am on its first day.  Firstly there is the "welcome to conference" speech by the Senior Vice President, Carol Sewell. She introduces all our international guest visitors.

Followed by Standing Order Committee (SOC) reports 1 and 2 (it is a long standing tradition at NDC to play reference back ping pong with SOC).

This is followed by a presentation and vote on our annual report and our year end financial statement. Our first motion of conference was 18 "Stepping up the campaign against bullying and harassment".

During lunch I went to the UNISON "There for You" AGM as a NEC member of the charities board of trustees. After lunch there was another round of ping pong and further motions debated including the 55 "UNISON and the WASPI campaign" about the rip of pensions by this government for many women.

Our General Secretary, Dave Prentis, gave a very powerful speech during which he thanked our emergency workers for all they had done in recent times and talked about the unexpected loss of his comrade, our President Eric Roberts.  After the speech I could see from the NEC platform a number of delegates wiping tears from their eyes and there was a (genuine) standing ovation by Conference.

In the afternoon there were more debates. Conference finished at 5pm. On the way back to my accommodation I was stopped and "persuaded" to go an excellent fringe on "Pensions and climate change".