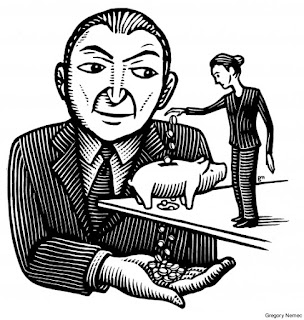 I was tasked to speak on this motion 26 on behalf of the NEC at Conference last week but it did not receive sufficient prioritisation by branches and regions to be debated.

Which is a shame since if we don't bring down the costs and charges of not only the Local Government Pension Scheme but all funded schemes and stop the rip offs then the future is bleak.


"John Gary, NEC and Chair of the SGLC LGPS Forum

UNISON have been campaigning for the right to know what it is we are paying for the management of our money and finally the veil of hidden costs are being removed.

We made a significant breakthrough when we persuaded the Local Government Pension Scheme Advisory Board’s for England, Wales and Scotland to adopt a ‘Code of Cost Transparency’ and move toward the collection and analysis of all costs incurred by the 100 pension funds.

This is conference an amazing step forward for workers and our savings. There is only 1 other country in the world with that transparency of cost and that’s the Netherlands.

Last week we had the country’s largest fund manager and manager of the largest amount of LGPS assets. £30bn. Declare it is signing our code of cost transparency, Legal and General.

This means every worker that has Legal and General managing their pension fund can now legitimately ask for the same cost transparency.

In Britain people get a statement showing what they've invested during the year, the value of their fund a year ago and its value today. There is no attempt to strip out what has been gained in investment returns and what is then subtracted in charges, let alone what these various charges are for.

Without this information people can't evaluate whether their pension trustees of manager is doing their job.

It is not just individuals who need this information to select a decent pension fund. Thousands of smaller employers will soon have to provide pensions for their workers.

Most have little idea how to evaluate these complex charging structures, so could end up selecting inappropriate and expensive schemes, potentially leading to mis-selling accusations at a later state.

Pension charges are too high and too complex. If your car is serviced in a garage you get an itemised bill explaining what each charge is for, which part was replaced and what the labour charges are, all in pounds and pence. No one would quote the fee as a percentage of the value of your car, which would be meaningless. But this is what happens with pensions.

So £billions of our money leaks out of our funds and we are the losers, they are used to pay for the extravagant life styles of the city traders and fund managers.

This money is used to fund the Tory party – our money cutting our own throats. Conference everyone needs to pay attention to the trial of money that starts from our payroll.

The UK Government must be pushed by us to finally curb the worst mis-selling scandal in the history of British finance, greater than endowment mortgages, PPI, energy profiteering or even sub-prime mortgages.

I refer to the legalised theft of billions of pounds from citizens' pension funds through excessive charges, a scandal that has been going on for at least 20 years and has ensured a miserable retirement for millions of older people.