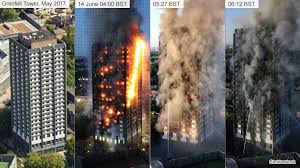 "Here is some information I was able to get hold of

2009 – Lakanal House tower block catches fire killing 6 people. The local authority is prosecuted for lapses in fire safety. A review is promised by the Labour government after pressure from the Fire Protection Association (FPA).

2010 – Building Regulations Act is published, including provisions for fire safety. Conservatives win election, a review is promised by the new government after more pressure from the FPA and warnings that the BR act does not go far enough.

2013 – Boris Johnson overrules the ruling body of the London Fire Brigade and uses legal action to inflict £29m in cuts. Closing 10 fire stations, cutting firefighters by 552, losing 14 fire engines and cutting minimum staffing levels from 5 to 4. By the time he steps down as Mayor of London he inflicts a further £100m in cuts to £130m total and the loss of 7000 firefighters. Fire prevention measures carried out by the service drop by over 25%. When challenged by a committee on fire safety on how cutting the fire service would not increase deaths, Boris replies “get stuffed”.

2013 – All Party Parliamentary Group on Fire Safety and Rescue produces a report strongly recommending installation of fire suppression systems and sprinklers in 4000 tower blocks throughout Britain. The Grenfell residents action group publishes a report warning that their landlord is putting their safety at risk by restricting the access ways to their car park. They are ignored by their landlord.

2016 – Conservatives vote against a Labour motion to make sure all landlords and housing associations ensure residences are fit for human occupation, including provisions for fire safety. The motion is denied by 312 votes to 219. 72 of the MP’s voting against are landlords. The Grenfell residents action group publish a report warning people will die in a fire before the landlord takes notice of their poor fire safety provisions. They are ignored by their landlord.

2017 – Ex housing minister Gavin Barwell becomes Prime Minister Theresa May’s chief of staff. He never actions the All Party Parliamentary report recommendations. Grenfell Tower is reduced to rubble with the deaths of at least 79+residents as a fire spreads through the building in 4 minutes. It has no fire suppression system or sprinklers. The stairwell is not adequate for a full building evacuation. The emergency lighting is missing from half of the floors. The fire service struggle to reach the building due to previous car park modifications causing access issues as warned by the resident action group in 2013.