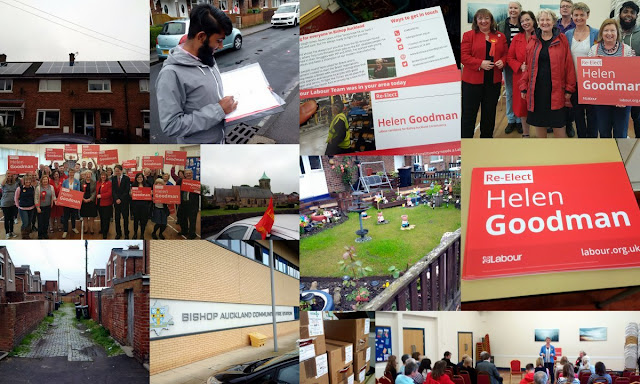 Picture collage from last Monday when a few of us from West Ham Labour Party, led by our PPC Lyn Brown, went up to Bishop Auckland in County Durham to support local Labour candidate, Helen Goodman.

We went first to a short mobilisation event of local party members in Spennymoor which was addressed by Helen and Yvette Cooper. PPC Sharon Hodgson was also there.  Yvette gave a pretty comprehensive demolition on any suggestions that the Tories were the party of law and order by detailing all the cuts in police and front line civilian staff.  Check out the UNISON map here https://www.unison.org.uk/at-work/police-and-justice-staff/key-issues/cut-crime-not-police/ to find out the Tory policing cuts in your area.

Next we went to canvass in Spennymoor with local activists. West Hammer, Muhammed Ravat, led our canvass team. There was many positive Labour responses particularly amongst women but there was some difficult conversations from a small number of people angry with Labour. When you delve deeper into this anger you find it is largely about rubbish pay, rotten and insecure jobs or inadequate housing. Ironically of course, Labour now has the strongest response in decades in addressing these real issues. We need to get that message out.

After the canvass there was a meeting with firefighters at  Bishop Auckland fire station. Lyn used to be the shadow Home Office spokesperson on fire authorities.

We then had another canvass session in St Chads (which had some fantastic individual gardens - see college). I had some in depth conversations with lifelong Labour voters about the general election and the need for working class people to see off the Tories. We know what they will do to us if they get in power for another 5 years.
Posted by John Gray at Monday, June 05, 2017