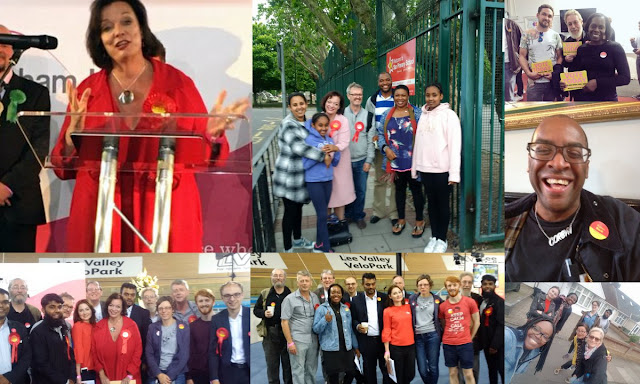 June 8 was not only a political historic day nationally but a busy day locally for all activists. At 4.30am 10 members of West Ham Women's forum were in Ilford North to deliver the "don't forget to vote" leaflets as were other West Hammers in marginal seats around London and Essex.

In West Ham itself we encouraged members on this day to go to either Ilford North or Westminster North marginals although many went to other seats including Dagenham. We had leafleting at our local schools and railway stations and we asked supporters who could not go to marginals to stand outside our polling stations to hand out leaflets.

As the Parliamentary Agent I spent most of the day in West Ham picking up elderly and disabled residents in my car and taking them to the polling station or organising lifts via local activists. I have always found it fascinating to do this. Life long Labour supporters who despite often being in pain and discomfort insisting that they will do their democratic duty and vote for their Party.

The reaction as I drove around with my little UNISON Labour link flag on my car was extremely positive with lots of waves, beeping of horns and flashing of lights apart from one potty mouth yob who received a traditional anglo-saxon visual response.

We had been asked by London Labour Party to arrange for them to be updated on turnout figures at selected polling stations and from noon all "Lyn Brown campaign "or West Ham Labour phone enquiries were diverted to my mobile as everyone else went off to the key marginals.

I had quite a few calls including media enquiries and they were nearly all pretty fascinating. They were predominantly from residents who had never voted and had no idea what to do.  I was asked what happens in the polling station, how do they actually vote, if they could vote via their mobile phone, is their vote secret, do they have to make a cross or a number?

It began to be clear to me that a number of young and old residents who have never voted before were planning to vote.

In the evening I visited a number of West Ham polling stations with our candidate Lyn Brown. She had a fantastic reception in all of them and in some she was actually (I exaggerate slightly) "mobbed" by constituents giving thumbs up, wishing us luck, saying hello and wanting to have their photo taken with her.

In all the polling stations we visited it was clear from talking to Presiding officers that turnout was up. Something was clearly happening. What that was we obviously did not know for certain at that tme.

At 9.45pm I was at the Velodrome in the Queen Elizabeth Olympic Park for the Newham Count (West and East Ham).

I met up with our 13 West Ham Count Agents and after a briefing we took our places at our Count to "sample" our vote. I won't say more about this apart than it is really important to do this and find out where your local vote is weak or strong.

I was running around at 10PM but managed to see on the Communal TV the result of the BBC Exit poll that there would be a a hung Parliament, which put a huge smile on my face.

It was a long night. After the sampling was complete we still had to take part in the checking and adjudication process on whether certain ballot papers were properly filled out or not. Including those individuals who had drawn very obscene but usually somewhat amusing cartoons on their ballot papers.

Afterwards many of us went to the Wanstead Tap bar to watch the results (and drink beer). I went home at about 6.30am feeling so happy but determined. There will rerun some time soon and as long as the Labour movement work together - we will win and form the next government.
Posted by John Gray at Tuesday, June 13, 2017