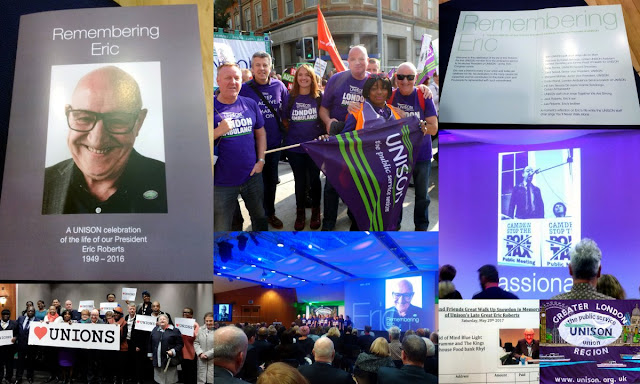 Last week there was a packed memorial and celebration service for UNISON President and London Ambulance branch secretary, Eric Roberts, who died unexpectedly aged 67 on November 24 2016. Eric had been elected the President of UNISON in June 2016 for a one year term. This is highest office for a lay activist in the union.

It was held in the TUC headquarters in Congress House, London. Our UNISON General Secretary Dave Prentis gave a speech celebrating Eric's life as did his son, brother and friends including the Cuban Ambassador no less.

Eric and I had worked together for many years as UNISON activists in London and we had enjoyed the occasional social drink or three. He was kind and supportive to me as a London regional lay activist and when I became an NEC member. He was a really special person and will be missed. Nuf said.