7 days to come out with new ideas about Newham Council budget 2017? 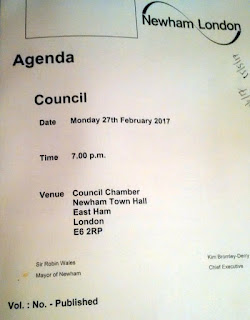 At the Newham Council meeting next Monday 27 February 2017 there will be a free vote of all Labour Councillors on the proposed Mayor;s budget. All Councillors in Newham are Labour so this an important development and I congratulate my Labour Group colleagues for agreeing to this.

As a Labour movement activist, I am a firm believer in collective responsibility (when democratically arrived at). When we have a Council with a powerful Executive Mayor and where there is no political opposition, this means that we have a responsibility to debate important issues, such as the budget, in public rather than it being decided behind closed doors in Labour Group and subject to a "whipped" vote.

That doesn't mean it should be a "free for all" nor an exercise in futile grandstanding.

The reality is that Council finances are dependent on Central Government funding which each year is being cut and cut and cut. It is also too late in the budget process for us to have a meaningful debate about the 2017/18 budget (but I live in hope) so the discussion at Council on Monday is in my view a more general debate about the future direction of Council finance.

If anyone has any ideas and practical proposals about the budget then please let me know. Details of the agenda is here
Posted by John Gray at Tuesday, February 21, 2017