"racist, spineless, uneducated scum" (Yep they are. I agree) 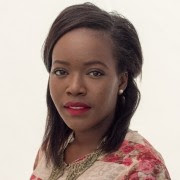 I haven't always agreed with everything our local weekly paper "Newham Recorder" has published over the years (or not published) but I totally agree with the comments below by its editor Michael Adkins on the foul and disgusting abuse my inspirational ward Councillor, Seyi Akiwowo, (photo right) received recently.

"While the birth of Facebook and Twitter has helped connect people like never before, launched careers, created millionaires, allowed us to follow our heroes and get in the mind of President Trump, social media has a sinister side.

It allows odious keyboard warriors to post wretched personal insults and threats from the privacy of their home, workplace or library.

It’s fast becoming a breeding ground for trolls who feel it’s given them free reign to insult, harass and threaten hardworking, decent honest people with their bigoted and racist bile.

Impressionable children are at risk of online grooming or 24/7 abuse from a playgrund bully.

Her work at the European Youth Hearings would have been a proud moment for all who know Cllr Akiwowo and the London Borough of Newham.

But the Twitter trolls simply saw it as an opportunity to show their true colours - as racist, spineless, uneducated scum.

Policing and managing social media is one of the biggest challenges we face and I’m not sure we have the answers.

Media organisations are subject to strict laws, rules and regulations when publishing stories. However, individuals are rarely prosecuted for breaches on social media.

Check out nspcc.org.uk for guidance on how to safeguard your children from the dangers".
Posted by John Gray at Thursday, February 16, 2017