Joining the Party by Rachel Finke 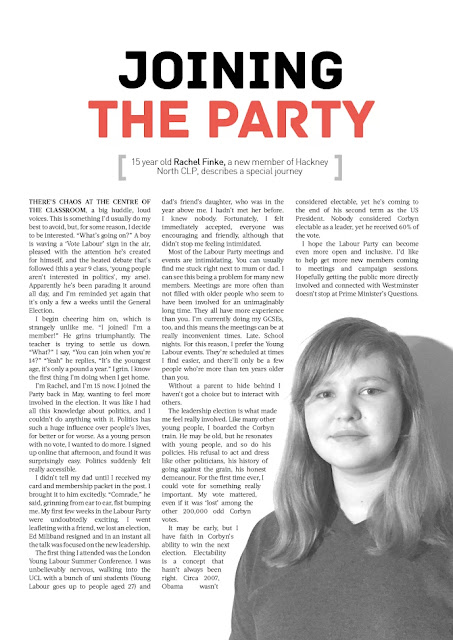 Recently I went to the memorial service for Rachel and saw Labour Leader, Jeremy Corbyn MP talk to a packed hall about this wonderful article. I never met Rachel and was there to support her father and his partner. But, I felt I did know her since her father had spoken and written so often about his talented daughters.

It was a deeply sad occasion but also a celebration of Rachel and her life. Family and friends gave beautiful and uplifting eulogies, personal reminiscences, poems, songs and music.

The family requested donations to the Mental Health Foundation in Rachel's memory.

As someone who joined the Labour Party on his 16th birthday (and had been allowed to attend branch meetings and campaign before that) I had forgotten how scary Labour Party meetings were to new members. I hope that this article is required reading for all Party Chairs and Secretaries.

THERE'S CHAOS AT THE CENTRE OF THE CLASSROOM, a big huddle, loud voices. This is something I'd usually do my best to avoid, but, for some reason, I decide to be interested. "What's going on?" A boy is Waving a vote Labour sign in the air, pleased with the attention he's created for himself, and the heated debate that's followed (this a year 9 class, young people aren't interested in politics, my arse). Apparently he's been parading it around all day, and I'm reminded yet again that it's only a few a weeks until the General Election.

I begin cheering him on, which is strangely unlike me. "I joined! I'm a member!” He grins
triumphantly. The teacher is trying to settle us down. "What?" I say, "You can join when you're 14?" "Yeah" he replies, "It's the youngest age, it's only a pound a year." I grin. I know what the first thing I'm doing when I get home.

I'm Rachel, and I’m 15 now. I joined the Party back in May, wanting to feel more involved in the
election. It was like I had all this knowledge about politics, and I couldn't do anything with it. Politics has such a huge influence over people's lives, for better or for worse. As a young person with no vote, I wanted to do more. I signed up online that afternoon, and found it was surprisingly easy. Politics suddenly felt really accessible. I didn't tell my dad until I received my card and membership packet in the post. I brought it to him excitedly. "Comrade," he said, grinning from ear to ear, fist bumping me...My first few weeks in the Labour Party were undoubtedly exciting. I went leafleting with a friend, we lost an election, Ed Miliband resigned and in an instant all the talk was focused on the new leadership.

The first thing I attended was the London Young Labour Summer Conference. I Was unbelievably nervous, walking into the UCL with a bunch of uni students (Young Labour goes up to people aged 27) and dad's friend's daughter, who was in the year above me. I hadn't met her before. I knew nobody. Fortunately, I felt immediately accepted, everyone was encouraging and friendly, although that didn't stop me feeling intimidated.

Most of the Labour Party meetings and events are intimidating. You can usually find me stuck right next to mum or dad. I can see this being a problem for many new members. Meetings are more often
than not filled with older people who seem to have been involved for an unimaginably long time. They all have more experience than you. I'm currently doing my GCSEs, too, and this means the meetings can be at really inconvenient times. Late. School nights. For this reason, I prefer the Young Labour events. They're scheduled at times I find easier, and there'll only be a few people who're more than ten years older than you.

Without a parent to hide behind I haven't got a choice but to interact with others.

The leadership election is what made me feel really involved. Like many other young people, I boarded the Corbyn train. He may be old, but he resonates with young people, and so do his policies. His refusal to act and dress like other politicians, his history of going against the grain, his honest demeanour. For the first time ever, I could vote for something really important. My vote mattered, even if it was lost among the other 200,000 odd Corbyn votes. It may be early, but I have faith in Corbyn's ability to win the next election. Electability is a concept that hasn't always been right. Circa 2007, Obama wasn't considered electable, yet he's coming to the end of his second term as the US President. Nobody considered Corbyn electable as a leader, yet he received 60% of the vote.

I hope the Labour Party can become even more open and inclusive. I'd like to help get more new members coming to meetings and campaign sessions. Hopefully getting the public more directly involved and connected with Westminster doesn't stop at Prime Minister's Questions
Posted by John Gray at Sunday, February 12, 2017