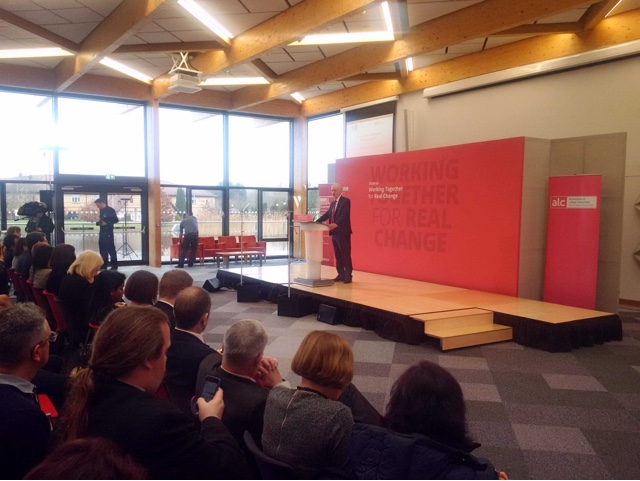 I arrived in Coventry yesterday evening for my second Labour LGA conference. This year it is the biggest conference they have ever had with 370 Councillors attending. There was a conference buffet dinner with deputy Labour leader,Tom Watson MP, as guest speaker.

It was a good opportunity to talk with Councillors from different parts of the Country and share experiences.  Dispite the huge financial problems facing  all Councils and the state of the Labour Party the mood was relatively upbeat.

I was also able to ask Shadow Housing  minister, John Healey MP, to speak again at my UNISON branch Labour Link AGM.  Former UNISON activist Angela Rayner MP was there as was Tower Hamlets Mayor, John Biggs and Hackney Mayor, Philip Granville and my favourite Birmingham Councillor (and fellow UNISON NEC member) Mary Locke.  It was a shame that there was no one else from Newham.

The conference started properly in the morning with an address by LGA Labour Leader Cllr Nick Forbes followed by keynote speech by Labour leader, Jeremy Corbyn MP to a packed audience. Jeremy attacked the Tories for asset stripping, failing social care and the NHS. He promised to get Council's to build homes.

Ever the gentleman, on his way out of the hall, Jeremy saw me, stopped to shake my hand and ask me how I was.

I will post more on conference later.
Posted by John Gray at Saturday, February 18, 2017