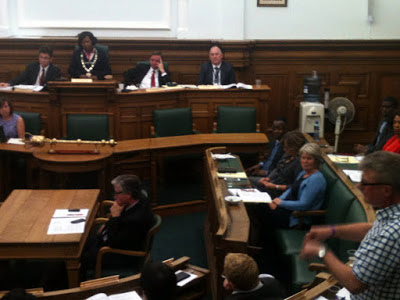 Well I never. Hot off the press. I will ask for further details (it is inaccurate in some respects) but I am really happy that it appears that some of the problems with LOBOs can be sorted.

"Newham Council could save up to £94 million in future after the council’s Cabinet today (Thursday 16 February) agreed to restructure its market debt with a major high street bank.

The decision enables the council’s director of financial sustainability to strike a new deal with the bank that will switch their structured loans (otherwise known as Lender Option Borrower Option or LOBO loans) into normal fixed rate loans.

The deal also takes the ability away from the bank to change the interest rate levels at regular intervals over the remaining lifetime of the loans. The new financial agreement will save the council up to £1.6 million per year on interest payments on these long term loans.

The agreement was made following lengthy negotiations with the bank. The market conditions are now right to strike this this deal which will deliver a clear financial benefit to the council.

The new deal is in line with the council’s Treasury Management Strategy, which reviews how much the council can afford to borrow and constantly monitors opportunities for restructuring or refinancing existing council debt where there is a clear benefit in doing so.

The council borrows money to carry out works such as improving the borough’s roads and to fund long term assets like buildings, such as schools, or bringing homes up to a decent standard. Government regulations meant that we cannot use long term loans to run services.

In 2007, Newham Council refinanced some of its debts to take advantage of lower interest rates available, at that time, through a series of long term loans from banks.

Previously the council was paying in excess of 10 per cent on its loans with the Public Works Loans Board, which lends government money to councils. These loans helped to refinance this expensive debt saving the council nearly £11 million to date in interest payments.