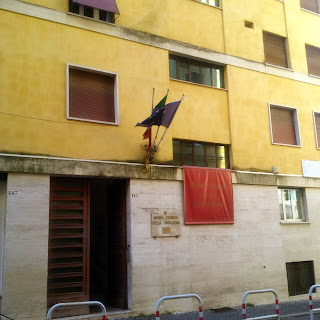 This is a very late post. Last October I had been on a week's holiday in Rome, Italy visiting the marvellous ancient ruins and historical sites.

On the last day I went to the "Museum of the Liberation of Rome". It was a little difficult to find and when I found it, it seemed to be just part of a typical Italian apartment block.

Which it was. In 1943 the German SS turned this ordinary residential block into a prison and torture chamber. Anti-fascists, resistance fighters and Italian Jews were interrogated, imprisoned and even tortured in these same rooms. Many were then sent for immediate execution or to die in concentration camps.

This SS base has now been turned into a museum and some of the cells have been restored.  The displays were informative but upsetting and disturbing. This must have been a place of pain, terror and despair for so many people.

I had spent the days immediately beforehand visiting the Rome Colosseum and the Forum and knew that great acts of brutality and cruelty had happened at all these locations. Yet this was all thousands of years ago and you can feel distance from it. The savagery that took place at Via Tasso 145, Rome happened in the lifetime of my parents and in an ordinary block of flats that you will find in every city and town in Europe and beyond.

I would recommend that if you visit Rome, you should definitely reserve an hour or two to visit this site and learn, remember and mourn.  Then vow to never forget and do whatever is necessary to fight present day fascism and Nazis - never, again ever.