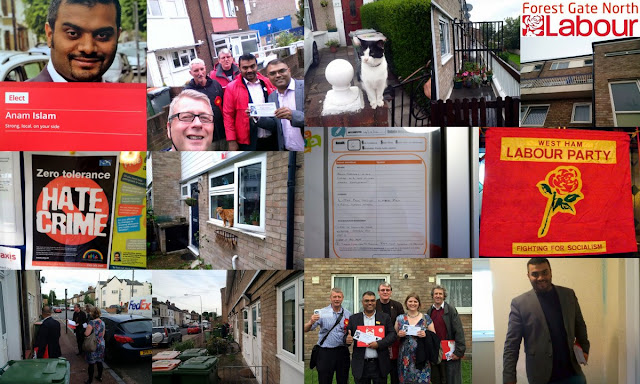 The campaign started last week but I was away at Unison National delegate conference. Following the disastrous referendum result and self destructive infighting amongst the Parliamentary Labour Party, let us be honest, that this is not the best time to be holding a by election.

However, the Labour vote seems as solid as ever and Forest Gate residents want a Labour councillor to be returned in the ward. This is not to say I have not had some serious conversations with residents about national politics but only 1 person in the past 3 nights has raised the leadership issue with me.

The referendum result has stunned people and the majority of people I have spoken to about it are ashamed of the result. We came across 2 residents who said they were normally Tories but they would not be voting for them in this election because of what has happened.

I spoke to one man on Monday who claimed that he did not know the result since he had ignored all the media since the previous Thursday evening and asked what had happened. I replied that I hope I am in the middle of a horrible dream and will wake up tomorrow and find out it was the Friday morning again, and we had actually voted to remain

East European residents I have spoken to have been quite understanding and pragmatic. They accept the result and while some are fearful about what will happen to them, most said they had been working in the UK for more than 5 years, paying UK taxes, so they thought they will be ok. They were of course as interested in local bread and butter council issues such as anti-social behaviour and parking control as anyone else.

I will post further on the EU referendum result (and why Newham had such an awful low "remain" vote). In the meanwhile can supporters please come out and canvass for Anam.