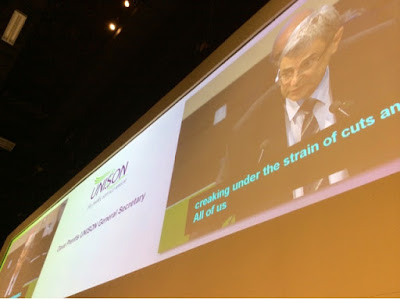 UNISON Press release "Commenting on the news that the UK has voted to leave the EU, UNISON general secretary Dave Prentis said:

“The people have spoken, and they have made a clear call for change – and a different relationship with Europe.

“We will be working in the coming weeks and months to hold the leave campaigners to the promises they’ve made – that there will be more money for the NHS, and that our rights at work will remain intact.
“But this also has to be a time for our country to heal. At its best the campaign has enabled genuine debate and discussion in our homes, workplaces and communities about the future of the economy and the kind of country we want to live in.
“At its worst, the campaign has been typified by hatred, vitriol and misinformation that have done a huge disservice to our democracy and values.
“Over the coming weeks and months, all political leaders must think about how to address the issues that people in our communities care most about – falling incomes, insecure jobs, unaffordable housing and the huge challenges facing our public services after more than half a decade of cuts. “
Posted by John Gray at Friday, June 24, 2016