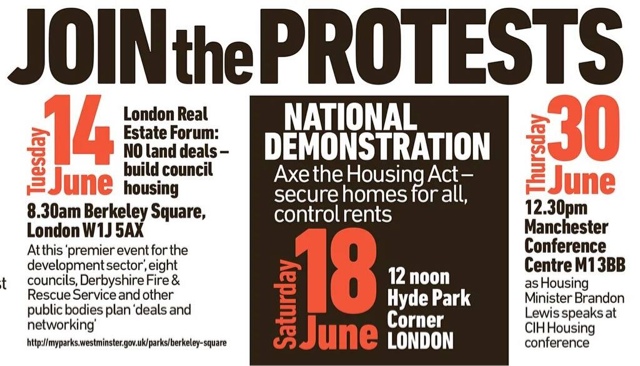 These are notes from a briefing and discussion we had at last months Forest Gate North Labour Party branch meeting on the Housing and Planning Act 2016 and it's consequences.  The briefing is based on an Unison report to its NEC. Our branch now tries to have a political discussion at every meeting.

"Former Chief of the Civil Service, Lord Bob Kerslake, who led the arguments against key aspects of the Bill in the Lords, warned that the legislation was an “attack” that would wipe out affordable
homes, as it will redistribute resources towards the building of homes for those on higher
incomes.

· Placing a general duty on all local authorities to promote the supply of “Starter Homes‟
which will be counted as affordable housing on new build developments. Starter
Homes will be sold to first-time buyers between 23 and 40 years of age, at a discount
of at least 20% of market value, subject to value caps.
· Providing for grants to be paid to housing associations to compensate them for homes
sold under the Voluntary Right to Buy.
· Legislating for the sale of higher value council properties in order to fund the extension
of Right to Buy. This money is also earmarked to build replacement council properties
and cover the costs of new registers of brownfield land for each local authority.
· Giving local authorities additional powers to tackle rogue landlords in the private
rented sector.
· Implementing package of de-regulatory for housing associations.
· Introducing mandatory rent increases for high income‟ tenants in council housing, the
so-called "Pay to Stay‟ policy.
· Phasing out secure tenancies for life for local authority tenants.
· Reforming the planning system with the aim of speeding up planning decisions and
delivering more housing, including measures to promote the use of neighbourhood
planning and local plans, as well as encourage the use of brownfield

This Act, if fully implemented will destroy social housing in this country. What is left of Government and developers grant will be used to fund Starter homes. Low income workers will not be able to afford Starter homes even with a 20% discount. The respected Housing charity Shelter recently estimated that in London you will need an income of £77,000pa and a deposit of £98,000. Where on earth will ordinary people on even average earnings get that sort of money from? Never mind the low paid, unemployed or retired.

Since Councils and Housing Associations will now stop getting money to subsidise housing then we will see little or no new homes at social rents.

Even worse following the Tory General Election bribe, housing associations homes will be sold off to tenants and to pay for the discount, councils will be forced to sell off some of their void properties each year. Possibly to pay for discount in parts of the country that does not have any Council homes anymore since they transferred them to Housing Associations. This is simply theft.

The "Pay to Stay" provisions in the Act requires many social tenants who together with their spouse earn over £40,000 in London and £31,000 outside to pay rents up to market rent or lose their social rented home (council or housing association home). The policy will be voluntary for housing associations but local authorities will be compelled to implement it without keeping the income generated from the increased rents that they will generate, this will have to be remitted to the Government.  This is also theft.
It will also destroy communities since many tenants in high value area will not be able to afford market rent and will be forced to leave or fall into arrears and face eviction. I note that even someone on £40,000 would not be able to afford a starter home either.

A DCLG impact assessment of the policy last year warned that it would likely result in behavioural impacts, including people deciding to move or reducing their earnings or hours to avoid paying higher rents. These impacts and the costs of administering the policy, which “could more than wipe out the extra income raised from the policy”, raises questions about why such a policy should be introduced in the first place.

During the passage of the Bill through the House of Commons, the Government introduced new clauses phasing out secure tenancies for life for local authority tenants.

This will mean that councils will only be able to offer fixed-term tenancies of between 2-10 years for most new council tenants. Councils will also have to review tenancies when they are about to expire to decide on renewing them or ending them to recover possession. The policy will likely lead to the break up stable and mixed communities, and force many people into insecure, expensive private lets.

What to do next?
The Housing and Planning bill is now an Act. However, many of the provisions will not come in force until next year and will have to come back to Parliament for approval of regulations. This gives us the opportunity to carry on campaigning against it. The Bill did have sustained opposition in and out of Parliament which led to significant concessions. The Government is weak and vulnerable to further pressure so there is everything to play for by campaigning against it.
Posted by John Gray at Friday, June 10, 2016