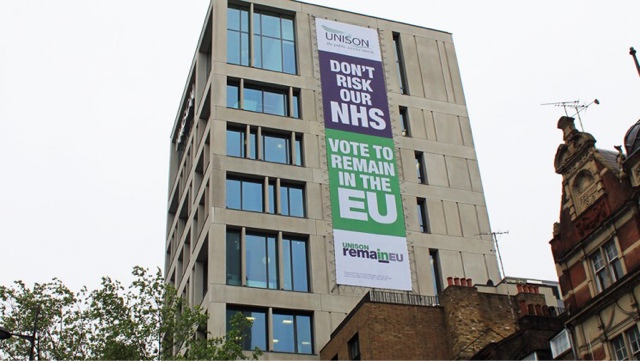 Latest Press release. "UNISON has taken a position – guided by our membership – to advise support for a Remain vote in the upcoming EU referendum.
Of course there are those within our union who take a different view, and those views are respected but what unites us all is our condemnation of the tactics employed by the official “Vote Leave” campaign, and racist, xenophobic rhetoric employed by some leading campaigners for Brexit.
In particular, we are concerned by the divisive anti-immigrant rhetoric employed by the campaign, designed to turn worker against worker rather than making real arguments about the EU: whether it’s the (false) claims by the official Leave campaign that Turkey is about to join the EU – clearly being pushed to add anti-Muslim sentiment to their list of little-Englander tactics – or Nigel Farage’s outright racist claim that women are at risk of sexual assault from immigrants.
It turns out the last refuge of the scoundrel is not “patriotism” but stoking up fear of the foreign.
It’s the hallmark of a campaign that has nothing to say about employment rights, and makes no guarantees around maternity/paternity leave, anti-discrimination or the working time directive. Likewise they have no explanation for how they are going to deal with potential post-Brexit skills shortages or economic shocks.
The biggest price for this divisive campaign will be paid by those who are demonised by campaigners for their own personal political ends.
Although UNISON is encouraging a Remain vote, it’s clear that there are arguments for leaving the EU. But they aren’t being made by the bilious, hate-filled campaigns aiming to drag us into international isolationism.
Those campaigns deserve our unreserved condemnation for their baseless attacks on immigrants and fear that diminishes their case and this entire debate. And, regardless of how you’re voting on 23 June, surely we can all agree on that".